Ciao! Welcome to the romantic country of  Italy with its wealth of delightful food, superb wine, and grandeur of architecture from which you simply can’t take your eyes off. There are at least one hundred reasons, why one should visit Italy. One of these reasons is its outstanding festivals. You’ve probably heard about Carnevale di Venezia, but have you ever heard about the Carnival of  Ivrea, famous for the Battle of the Oranges? You should definitely add it to your bucket list. The 2020 Battle of the Oranges edition will be held from February the 22nd to 25th, traditionally taking place on Sunday, Monday and Tuesday before Ash Wednesday.

ORANGE WAR OR THE WAY TO GET LADY’S ATTENTION

The Battle of the Oranges is a spectacular food war that attracts travelers from all over the world. The origin of this festival is still unclear. According to the popular legend, back to the Medieval times, Ivrea’s lord tried to rape the miller’s daughter, Violetta, on the eve of her wedding, supposedly exercising his droit du seigneur (right of the lord). The tyrant’s plan failed when the young rebellious woman instead beheaded him and townspeople attacked and burned the palace. Nowadays, every year, a young girl is chosen to play the part of Violetta, the defiant young lady. The battles are fought between nine teams of orange-throwers on foot( symbolizing rebellious people) and throwers on horse-drawn carts wearing protective clothing (symbolizing local guards of the tyrant).

However, there is another explanation of throwing-oranges festival. Some people say that the origin of this tradition is in the mid 19th century. Local girls, standing on balconies, started to throw some oranges at the parade carriages, together with confetti and flowers, in order to draw the attention of boys in the carriages. Boys started throwing some objects back at girls, and that is the other theory of how this little battle began.

Some people don’t relish the idea of getting struck by a flying orange. But if you are crazy enough, really want to soak in the culture and traditions of the city and have a desire to take a part in the orange-throwing battle, you can volunteer to join one of the nine teams on foot. If you don’t want to be the target of orange throwers and at the same time you want to show your full participation,  wear the Berretto Frigio (a red cap) and you’ll be seen as a spectator and not a target. Although a red cap can’t guarantee you won’t get hit by orange, so dress accordingly. Wear non-slip shoes and clothing you don’t mind getting dirty. 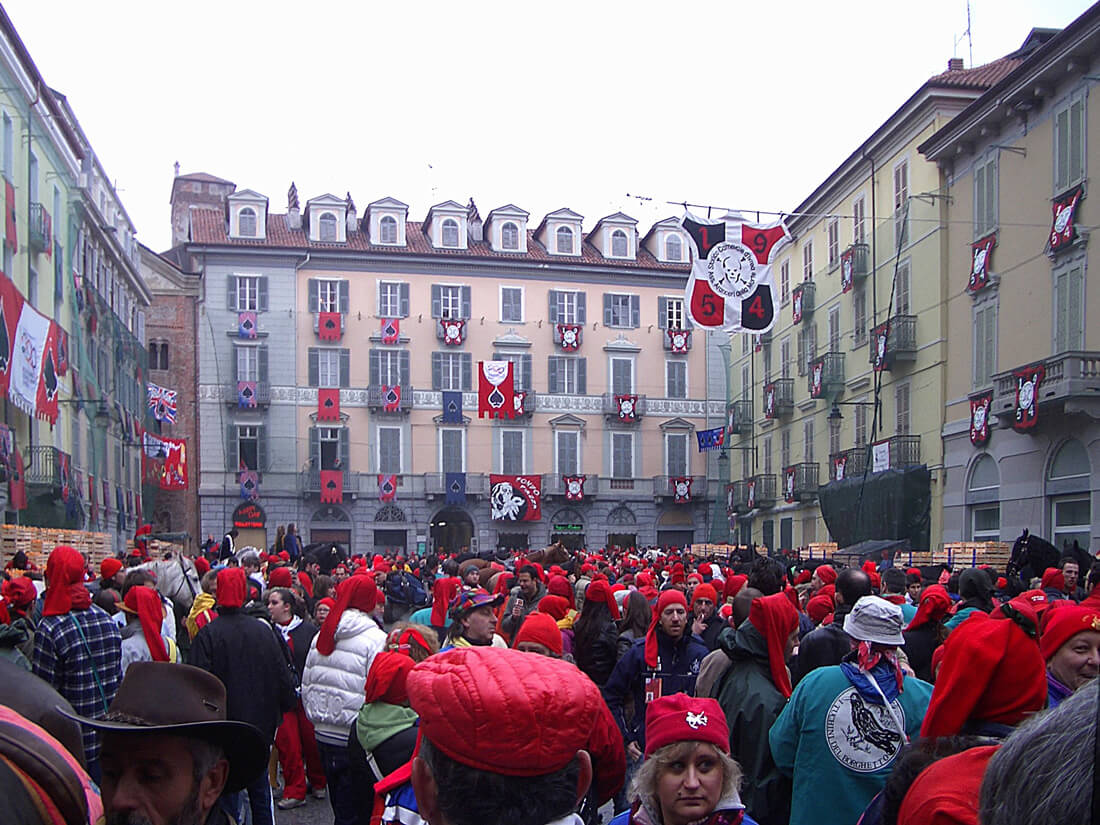 MUST-SEE AND MUST-TRY  IN IVREA

Besides throwing oranges and watching the food battle, there is myriad of other things to do and see in Ivrea. Ivrea is a charming, picturesque, medieval little town. Start your sightseeing from Piazza Castello and Castle of Ivrea, then go to Bishop’s Palace and Ivrea Cathedral, which are superb examples of Medieval architecture. Check out one of Ivrea’s several museums, for instance, Civic Museum of Ivrea. It is definitely worth spending time on it. Besides, if you are born with a sweet tooth, you should definitely visit creative chocolate shop Nella Chocolate. You can also take a walk down the Via Arduino and Palestro, which are considered to be the main shopping streets.

The very important part of getting acquainted with the city is tasting its local cuisine. In the morning, during Carnevale di Ivrea, don’t miss the free distribution of beans. Cured pork and beans washed down with red wine is a foodgasm. Speaking of local wine, you should try spiced, hot-served wine, known as vin brulé. Its fragrance and exquisite taste make it a must-try for every traveler. And, probably, the best way to finish a meal is a piece of Torta 900. This is not just a cake, it is a delectably sweet chocolate cake, that simply melts in your mouth and is an example of a spectacular Italian cuisine.

Although the Battle of the Oranges is a little messy and even violent, it is not simply the throwing of oranges. For locals, it is an important part of their culture and first of all, it’s the symbol of their liberty and freedom of expression. The Battle of the Oranges makes this carnival one of the leading carnivals in Italy and all over the world. No elaborate preparations are required. Just book accommodation and air ticket in advance, bring your Berretto Frigio, comfortable clothing, plus yourself and your friends. Find your freedom, unleash yourself from rigid rules and gloomy daily routine. Feel the vivacious atmosphere of the Carnival de Ivrea and its crazy, yet fantastic Battle of the Oranges.