Amsterdam is a popular touristic spot. Myriads of people from all over the world swarm the city every day for different reasons. Since Amsterdam is advertised as the city where everything is allowed, some people call it a paradise for drugs and sex. And, surely there is some truth in these words. However, if you live for some time in Amsterdam and communicate with locals, you will find out that in fact, the Dutch are very conservative and secluded, they care a lot about their social space and they are definitely not porn merchants and drug traffickers as  many people think due to numerous false stereotypes about Amsterdam, spread across the globe.

People in the Netherlands like to say ‘doe maar gewoon dan doe je al gek genoeg’, which means  ‘just act normal, that’s crazy enough’. These words perfectly describe the way of life of an average Dutch. But everything is completely different when the day of “orange madness” comes and unites reserved Dutch in the crazy & orange atmosphere of King’s Day.

Koningsdag or King’s Day is a National holiday, which takes place in the form of the huge vibrant street party on the King’s Willem-Alexander birthday. As a rule, King’s Day is celebrated on 27th of April, but when the King’s birthday falls on Sunday, all the celebrations are moved to Saturday.

Also, it is interesting, that this holiday is called King’s day only for a few years. For decades King’s Day used to be the Queen’s Day, due to the row of the powerful female royal monarchs. The holiday was held initially on the  31st of August, 1885 as Prinsessedag ( Princess’s Day), on the birthday of the heir to the throne,  Princess Wilhelmina. When in November 1890 she was enthroned, the holiday got the name Koninginnedag (Queen’s Day). With the coronation of Wilhelmina’s daughter Juliana,  the celebrations were moved to Juliana’s birthday, the 30th of April. The next was Queen Beatrix. Naturally, the holiday supposed to be switched to her birthday, but she decided not to change the date. Firstly, in honor of her mother, the previous Queen Juliana. Secondly, probably, because of not the best weather in the Netherlands on her birthday which falls on the 31st of January.

Nowadays as we already mentioned, the Dutch and thousands of tourists celebrate the birthday of the King Willem-Alexender, on the 27th of April with obviously better and warmer weather for the open-air festivities.

IF KING’S DAY, THEN IN AMSTERDAM!

Although you can find celebrations, and parties dedicated to the King’s day, in every corner of Netherlands, Amsterdam remains the location of the most splendid celebration with fascinating musical performances, dancing, and positive ‘orange’ vibes.

King’s Day celebration in Amsterdam kicks off on the eve of the holiday. People call it King’s Night. This is a time when the  Amsterdam is transformed in the city of the astonishing, mind-bending concerts and parties with the best world-known DJs. Celebrations proceed to the morning, and often don’t stop the next day, but grow to the next level. And it is a sin not to party on this day!

THINGS TO DO ON THE KING’S DAY

When the KIng’s day begins, we recommend you not to start the day at Amsterdam’s infamous “coffee shops”, if you don’t want to be stoned for the whole day, melting on the sofa from mind-numbing marijuana. You can relax in a coffeeshop in Amsterdam any other day, but the party vibes of King’s day you can enjoy only once a year.  The first highlight of the holiday we advise to visit is vrijmarkt (literally ‘free market’). During the Koningsdag, people are allowed to trade for free, without any license.

From 7 am till 11 am, Amsterdam transforms into a large street market. There you can find everything, starting with old children’s toys, second-hand clothing and finishing with gadgets offered at low prices. If you want to relish the variety of goods and find something unique,  you should come early in the morning. But remember that this free market is more about having fun than buying something really valuable. Just follow the simple rule: don’t be shy to negotiate about price and simply have fun. Also, you can try to set up your own shop and sell something, perhaps, something you’ve always dreamt to get rid of but didn’t have a chance. 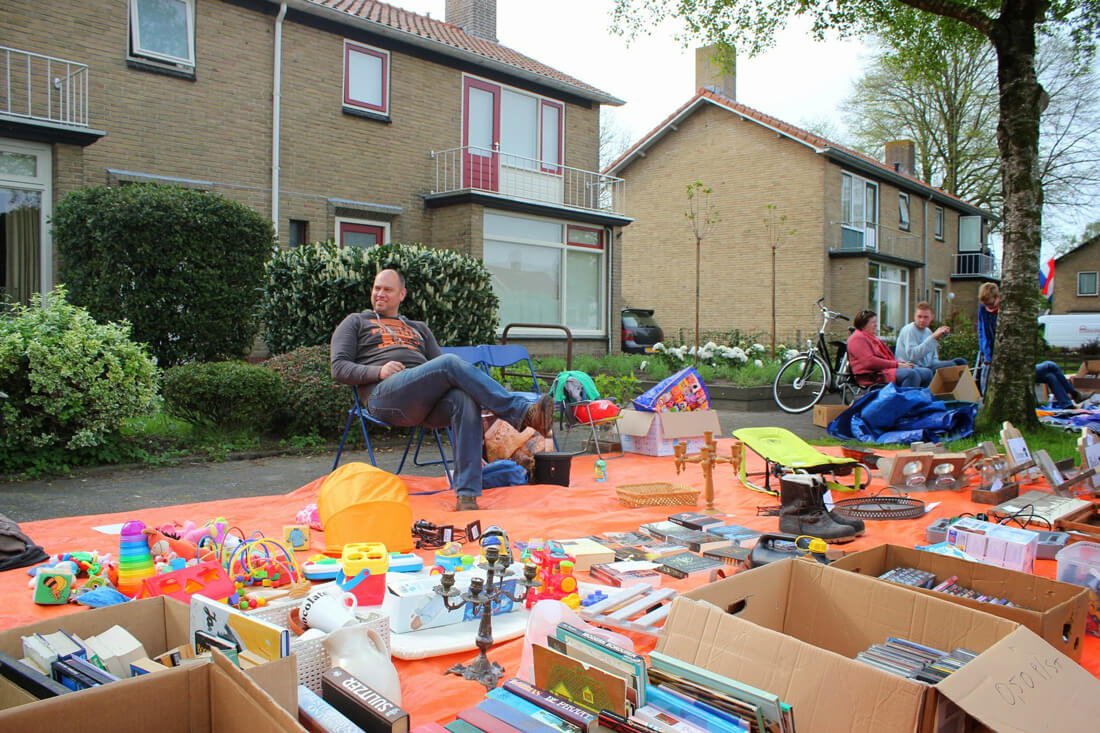 Except for trading and partying to the DJs beats on King’s Day, there is also a host of other activities. Whether you came here with your boyfriend or girlfriend, family or friends, you will find something appealing to you. Visitors are offered to take a part in numerous, games, sport events. While parents can have their beer, kids may play some Dutch games, like koekhappen, in which they bite off an attached to the thread spiced cake, called ontbijtkoek. Another popular game is spijkerpoepen (in which participants tie a string around their waist with a nail dangling at one end, which they try to lower beyond the bottleneck without using their hands).

One more attraction of the King’s Day is its parades of colorfully decorated boats that fill Amsterdam canals. Prinsengracht is the main canal with the biggest concentration of boat parties. To join the floating party, you don’t need a special invitation. Very often boats just stop near shore to pick up any willing to party with them. However, joining this party, mind that only one regular drink per person is allowed on the boat and most of the boats don’t have a toilet. You should definitely join the floating party if you have an opportunity, but if not, there is a plenty of other non-stop parties in Amsterdam. 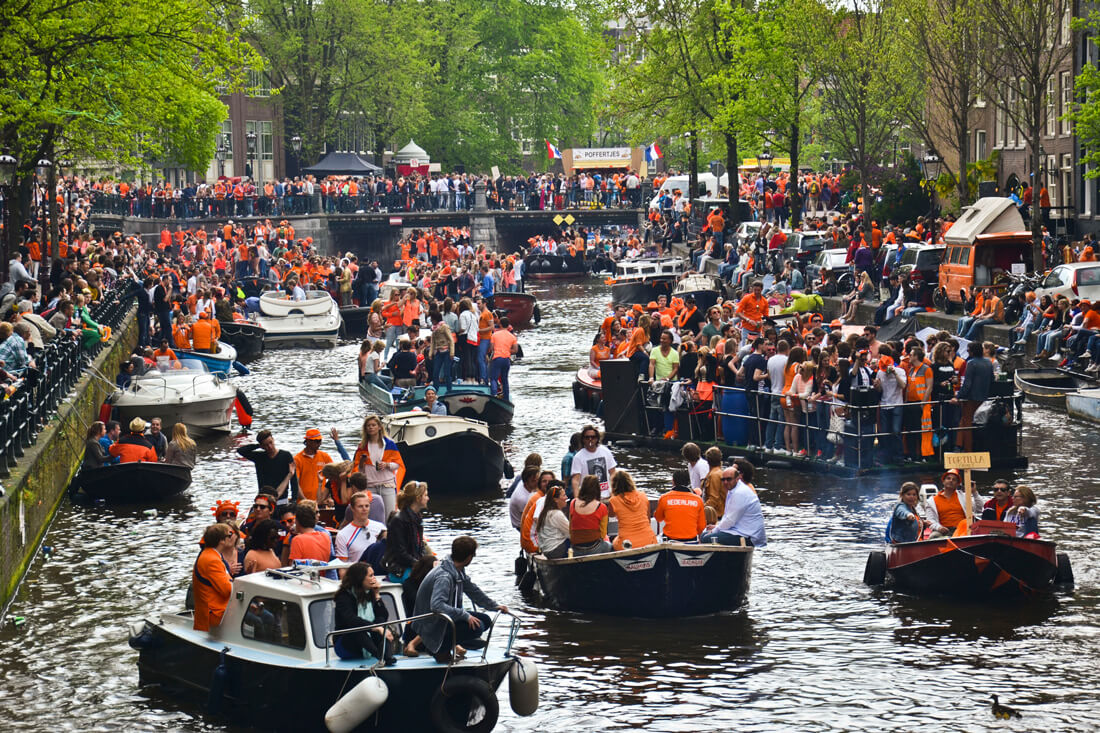 Except for the huge free market, amusing Dutch games and crazy partying, you can take a break and go to some museums. Majority of museums are closed, as King’s Day is a national holiday. But a few hotspots, such as Van Gogh Museum, the Anne Frank House, the Rijksmuseum and Stedelijk Museum stay open.  Of course, we don’t suggest you spend one of the biggest holidays in the Netherlands only in museums. When you enriched yourself culturally, you can always join the revelers and continue partying until the end of the day.

In addition, during the Koningsdag, you can be lucky to see the King and the Queen, not on the TV, but in the real life. Each year, on the King’s Day, royals go to a certain town in the country to meet the people and participate in the celebration, playing  Dutch games and enjoying the old traditions of the country. Despite the many accidents that happened during the several King’s Day and Queen’s day celebrations, Royal family doesn’t stop attending this annual street celebration, trying to show the connection and equality of royals with the Dutch people.

Now when you know about the main attractions of King’s Day, you may have a look through some useful tips, that might help you enjoy King’s Day to the fullest. 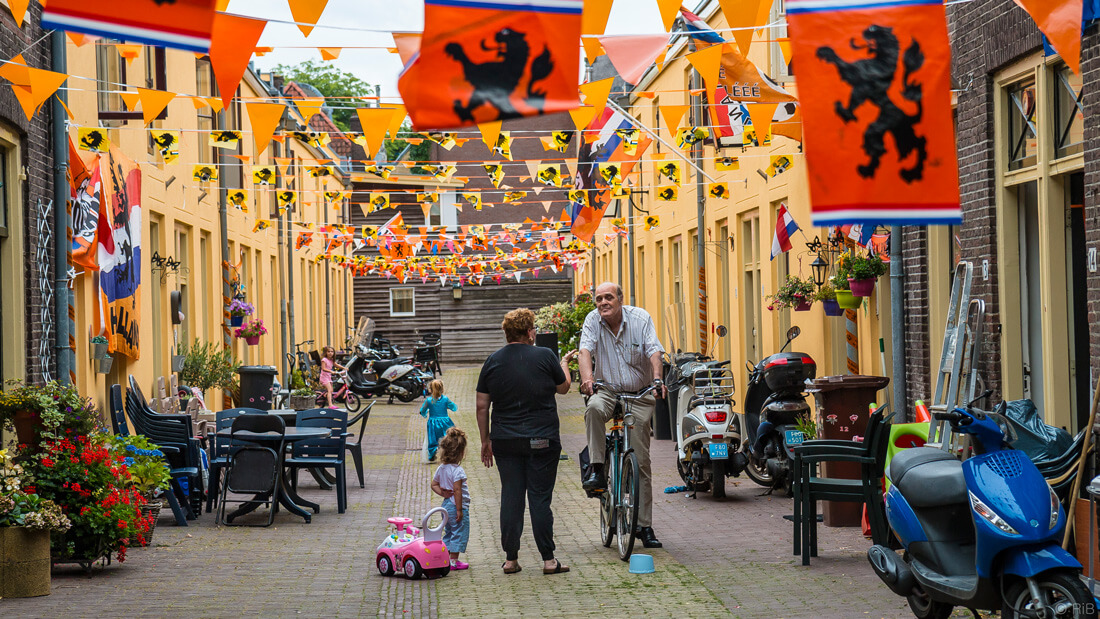 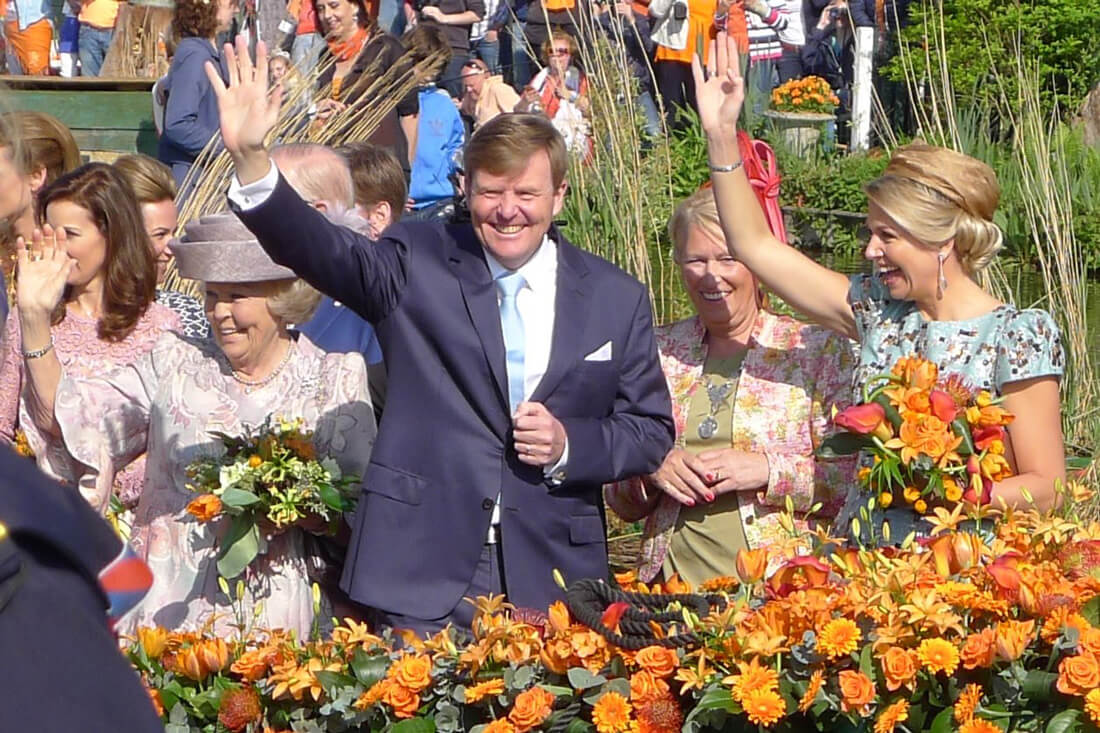