The smell of gunpowder, the earsplitting explosions of firecrackers, enormously huge effigies burning in flickering and dancing inferno flames. What is that? The revolution? The apocalypse?  This is the most quirky, glowing and roaring festival in Valencia, Spain – Las Fallas!

THE ROOTS OF LAS FALLAS

The origin of Las Fallas is a bit vague. Some people say that the origin of Las Fallas ( ‘the fires’ from Valencian) originated from pagan rituals and tradition to burn everything old and bad from the past year in order to celebrate the equinox of spring as the symbol of revival and beginning of a new life. Others suggest that the Fallas started in the Middle Ages when Valencian artisans and carpenters used wooden structures called parots, to hang their candles on, in order to illuminate their talleres (workshops) in winter. But with the advent of the spring, parots were no longer needed, so they were burned.

Under the influences of the Church, the date of the burning of parots merged with the festival of San José, the patron saint of carpenters, and that is how las Fallas de San José appeared.

Since those times, the traditions have developed greatly. The parots began to obtain human forms. Therefore nowadays you can see jaw-dropping huge dummies: large puppets called fallas, and smaller puppets, called ninots, which can be found in every neighborhood of Valencia. You will be amazed by the paper-machè and polystyrene towering figures of up to 30 meters. The best carpenters spend the whole year creating the unique statues, depicting satirical scenes, Spanish celebrities, and caricatures of corrupted politicians. Such constructions remind a bit “carri allegorici”, satirical floats at Carnavale di Viareggio, Italy. Both festivals allow people to convey their emotions through art, to be free in expressing yourself and laughing at problems that you face in nowadays world. But there is a significant difference that lies in the culmination of processions. While in Italy they wrap up the celebration with dazzling fireworks, in Valencia the apogee of the festival is the burning of effigies. Although some people say that it is a waste of money to blaze such fabulous and extravagant puppets, don’t you think that there is something very stress-relieving in this burning to ashes of dolls? Nevertheless, before everything is set on fire, there is much to do and see for every visitor.

THINGS TO DO AND SEE ON LAS FALLAS

In 2020 Las Fallas is held from the 15th to 19th of March. Every day you have no choice but to wake up early in the morning at 8 am, thanks to la Despertà, local wake-up-call. Brass bands start to march down the streets playing exhilarating music. In addition, fallers throw firecrackers near people’s windows in order to wake up every one without exception. Another highlight is Mascletá, which takes place in the Plaza Ayuntamiento at 2 pm. It is a boisterous show of simultaneously exploding fireworks, that will give you a feeling of being in the very heart of earthquake.

However, besides all the festivities that are going on, clearly that all people are looking forward to the Plantà, which occurs traditionally on the night of the 15th of March. It is a time when carpenters gather to complete to the end of the day all the installations, every single ninot, and falla. So, next day, don’t waste your time, get up with the first firecracker of la Despertà and go to explore marvelous creations of carpenters. To see some of the more intricate ones, we advise you to visit the neighborhoods of El Carmen, Ruzafa and Plaza del Ayuntamiento. 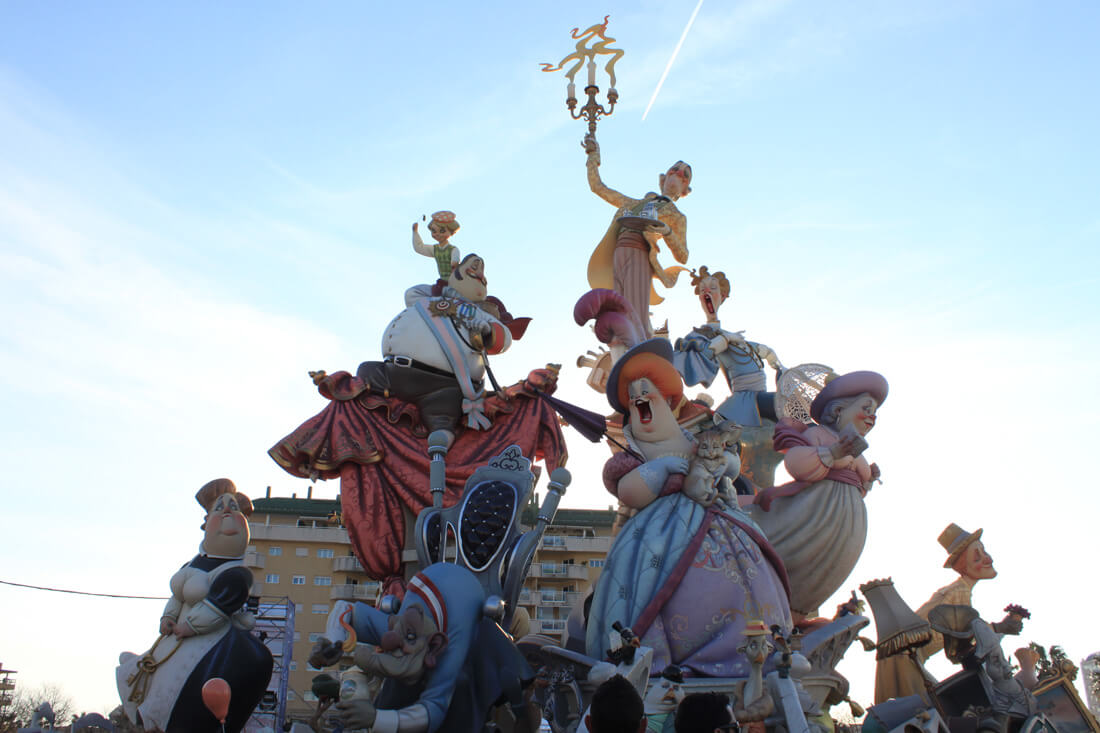 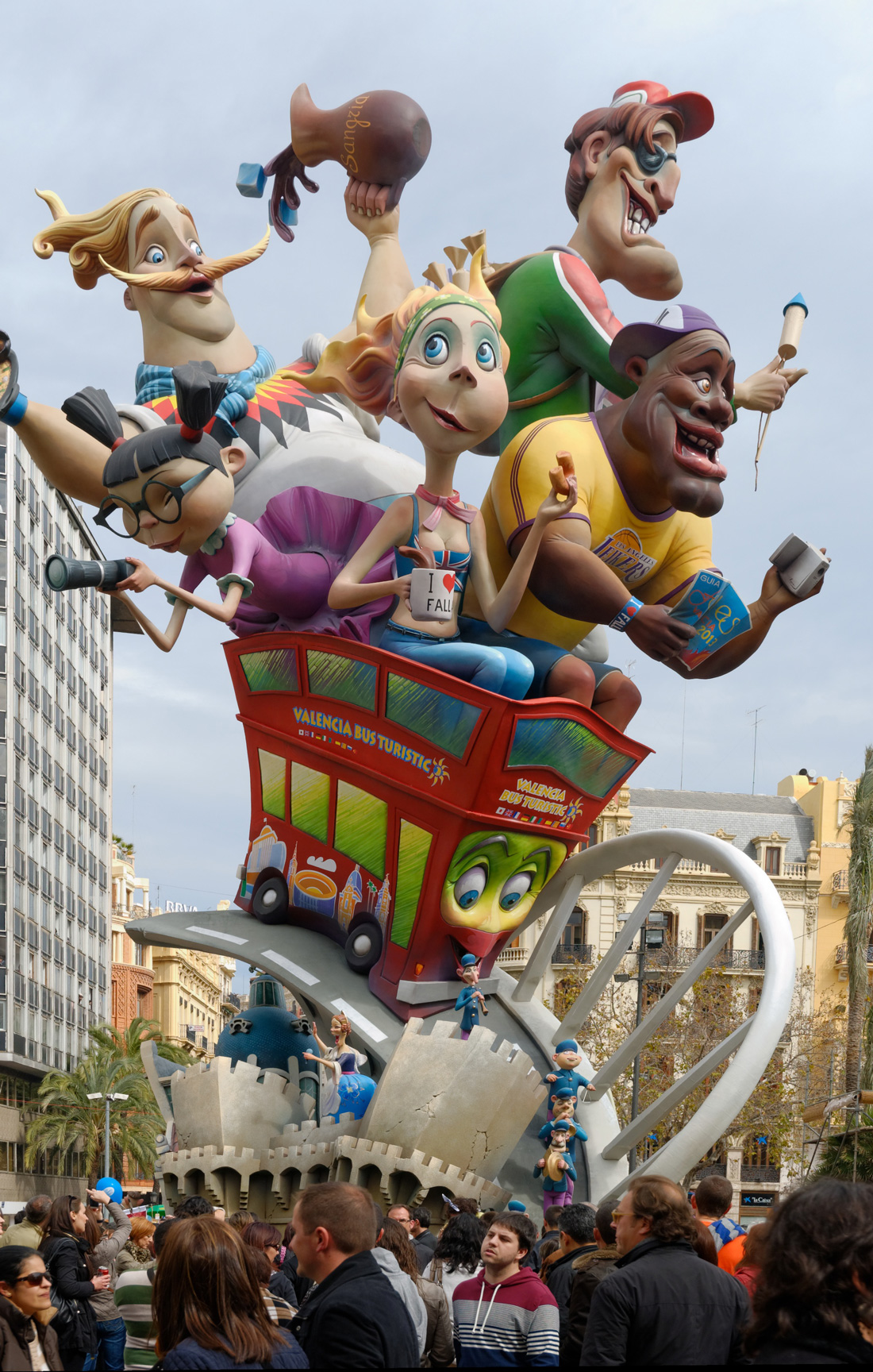 In addition every night from 15th to 19th of the March you can witness the spectacular, colorful fireworks show.  The night on the 18th of March, which draws most of the attention, is called the Nit de Foc (literally “The Night of Fire”). Come to the Paseo de la Alameda and relish the astonishing display of color and light.

Also, having come to Las Fallas, the beautiful city of Valencia, it is a crime not to sample local paella, which is considered to be a Royal dish of Valencianos. If you are born with a sweet tooth, try popular Spanish goodies, like churros and buñuelos with chocolate. Then, if you are not faint-hearted, visit one of the bullfights, but remember that ticket should be bought in advance. In case you do like animals and see nothing fun in teasing poor bull, instead, we advise you to walk around the ancient city with its far-reaching history, socialize with locals and make some new friends.

Besides, Las Fallas is not only about eating, dancing, burning and destroying. This festival contains a religious element. On the 18th of March, you can contemplate  L’Ofrena de flors, an offering of flowers to the Virgin of the Helpless. It is a grandiose parade of falleros (male) and falleras (female) in the fanciest, elegant silk and lace dresses, bringing you somewhere to the period of Renaissance. They march slowly and solemnly to the huge wooden statue of the Virgin Mary, offering bouquets of flowers, which are then properly attached to the effigy.

Finally, it is the 19th of March on the calendar, which means that the most anticipated day of Las Fallas has come. The climax of the festival is la Cremá. It is the fieriest event of the festival when the giant sculptures are set ablaze. Approximately at 10 pm, they set on fire smaller statues, and at midnight they mercilessly burn larger statues. You will be simply astonished by the scenery. Crowds are chanting, firemen are trying to protect the buildings, while doll-like ninots are ‘dying’ in the hellish fire. But, one ninot is saved from the destruction. This ninot is called the ninot indultat, which means the pardoned puppet. All the statues that ‘survived’, are now exhibited in Museo Fallero, which is a must-go for every tourist.

Now different thoughts pop up in your mind. Probably, you think that Las Fallas is just a waste of the thousands of euros, and first of all, it is a waste of precious time and efforts of carpenters who poured their heart and soul in those puppets. But Valencianos take everything positively. No sad faces can be found, as this festival is a chance to burn the bridge with the past, to get rid of everything that bothered you through the year. And the approach of the spring, isn’t it a high time to write a new page in your book?

Immerse in the crazy atmosphere of smoky air, crackling firecrackers and night sky filled with infinite fireworks. Experience the freedom of life at one of the hottest and inspiring festivals! Welcome to Las Fallas!