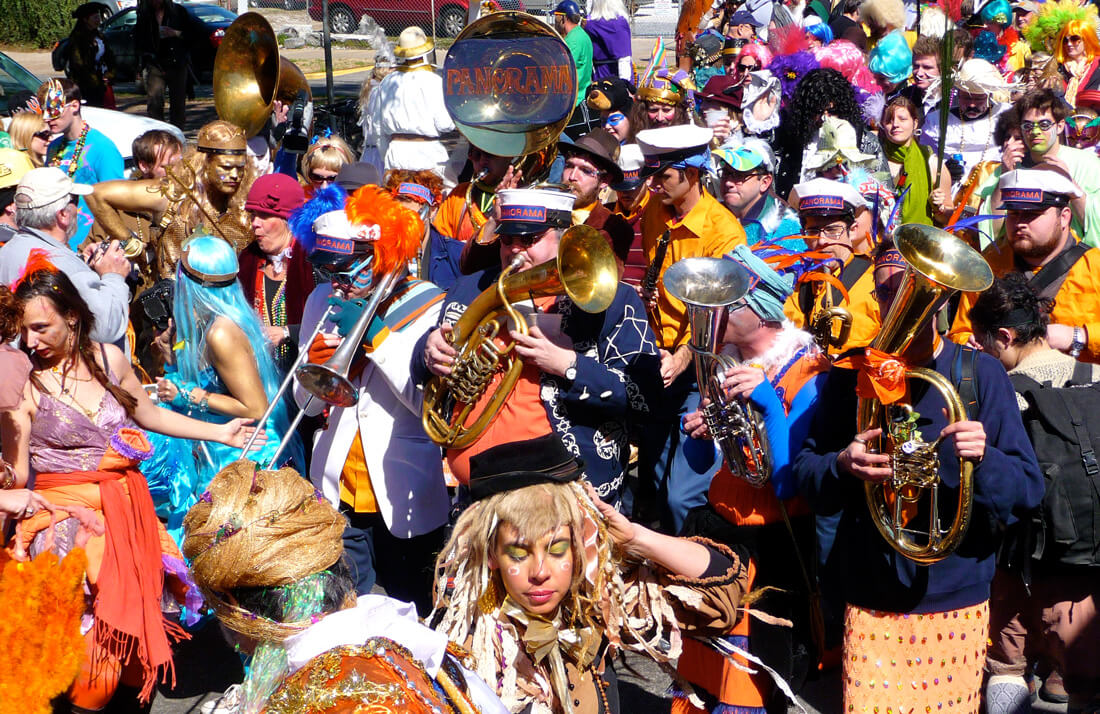 You feel like you are trapped in the chaos, everything is upside down, you are losing your mind, surrounded by thousands of revelers throwing beads at you. You are at Mardi Gras, my friend!

However, for different people, Mardi Gras means different things. For natives, it is a lifestyle, it is in their veins, for some people it is just a day, for others it is a state holiday or an infinite series of parades. Definitely, it is mistaken to think, that it is all about booze and beads.

SO, WHAT IS MARDI GRAS AND HOW DID IT START?

As most holidays and festivals, Mardi Gras is the result of years, if not centuries of creation and evolution. It is said, that Mardi Gras traces its roots to medieval Europe. Historians say that it expanded from Rome and Venice in the 17th – 18th centuries to France. Later, that Carnival celebration appeared in the French colonies. In 1718 the French established the city of New Orleans, and by 1730, Mardi Gras had become an integral part of city’s culture. However, the earliest celebrations of Mardi Gras in New Orleans looked much different, comparing to today’s one.

Nowadays, Mardi Gras or Fat Tuesday, if to translate from French, is known as one of the biggest, mind-blowing events in the United States. Technically, Mardi Gras is the final feasting before Lent and despite all the craziness of the event, it has been a legal holiday in Louisiana since Governor Warmoth signed the “Mardi Gras Act” in 1875.

In 2020, Mardi Gras takes place on Tuesday, February 25. First, you should understand that it is not a one-day celebration. Fat Tuesday is the final day of Carnival season, which begins on the Feast of the Epiphany, January 6th. So, when you hear that people are going to New Orleans for Mardi Gras, it means they go to see many parades and usually they start partying 2 weeks before Mardi Gras itself.

PARADES ARE INSEPARABLE PART OF MARDI GRAS, BUT NOT THE ONLY THING TO ENJOY DURING THE FESTIVAL

Walk around the city, there are lots of highlights to see. The French Quarter is not the best place to walk with children during Carnival season and it might get a bit dangerous after midnight, but you shouldn’t avoid this area. Being in New Orleans and not going to French Quarter to check the most fascinating attractions is a sin. Jackson Square, which is a heart of French Quarter, is a must-see. Here you can take a break from catching beads, take a lot of photos as a memory about New Orleans. You can also visit Ogden Museum of Southern Art with its impressive collections of photography, paintings, and ceramics. There are many walking tours you can take or you can tour the city in an open-top, double-decker bus. One more thing you will like about New Orleans during Mardi Gras is the improvised jazz performances, on the streets of the French Quarter. You can also explore Frenchmen Street, which is one of the favorite locals’ spots, full of top-notch restaurants, jazz bars and plenty more. 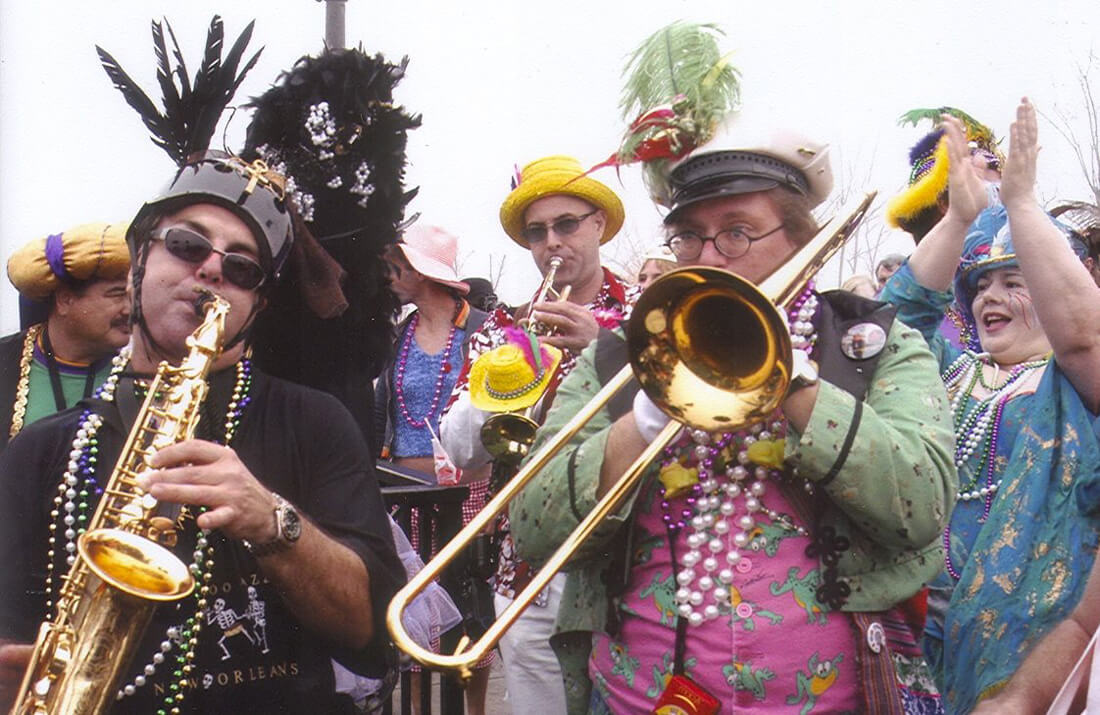 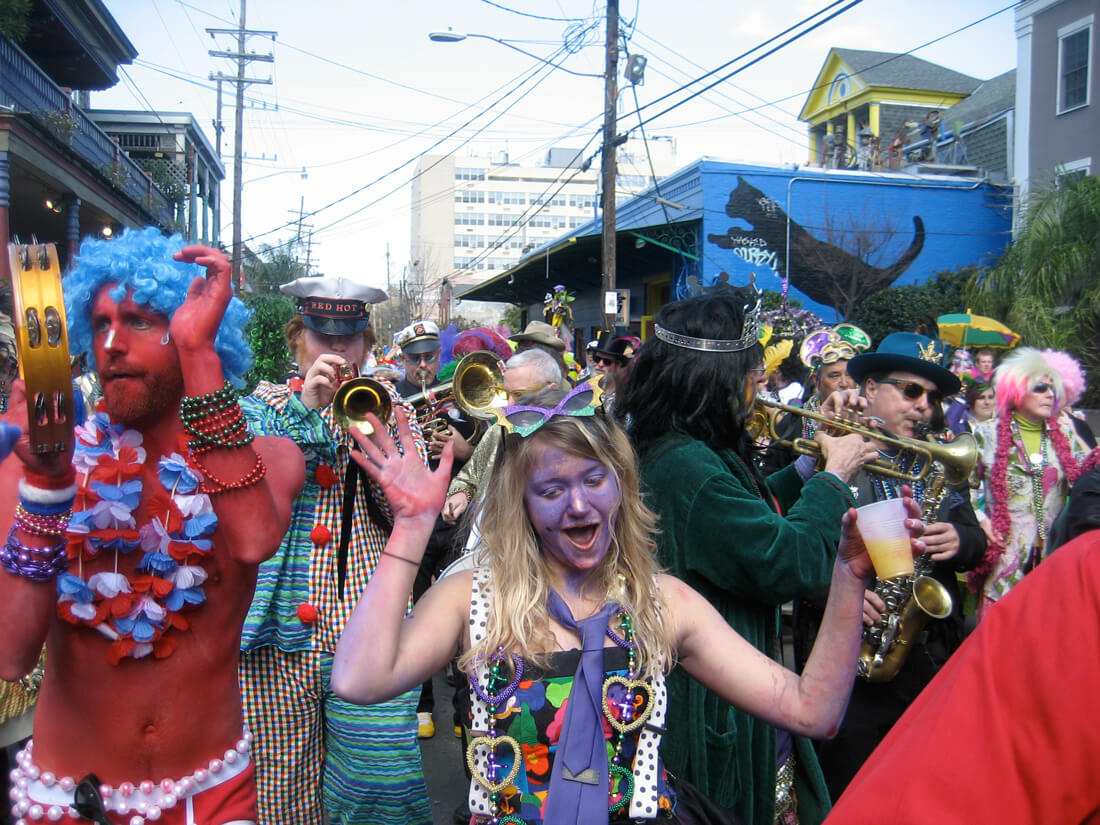 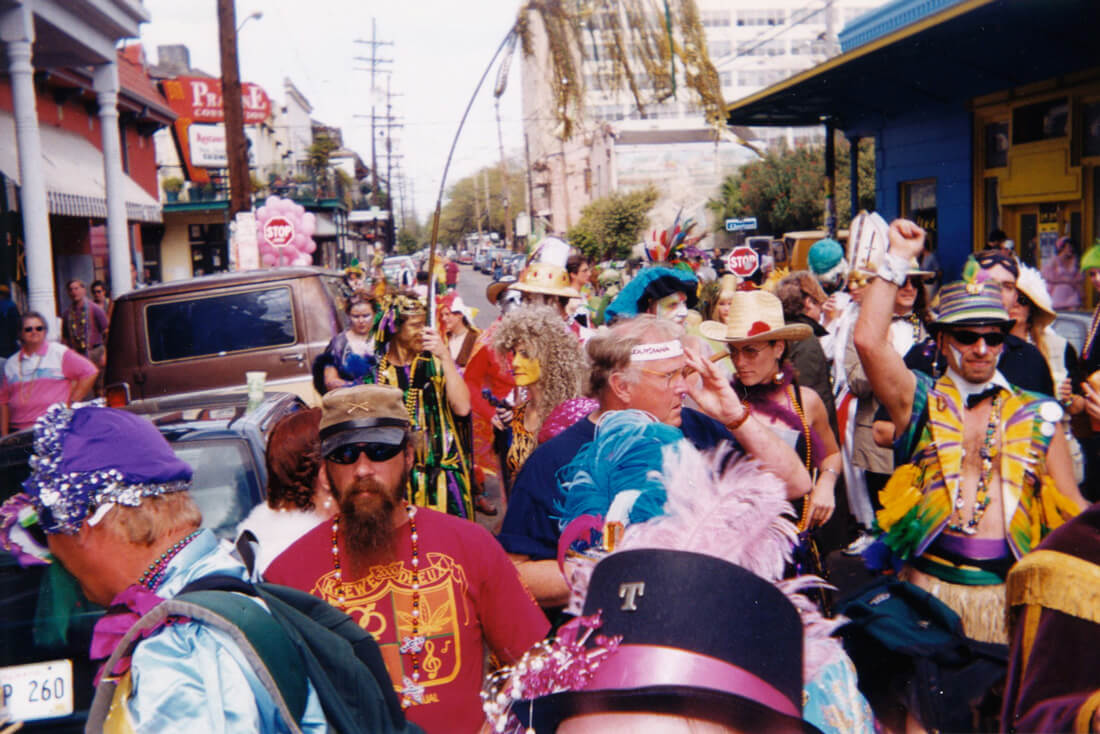 The first place you should go to is Café Du Monde, where you will discover one-of-a-kind New Orleans cuisine. Note, that this café is open 24 hours a day. The city’s most famous treat, that locals and visitors just can’t resist, is the beignet. You can eat it as a breakfast, snack or as dessert, it’s perfect for any time of the day. Not far from Café Du Monde is the French Market, where you can find some excellent souvenirs to bring home.

Speaking more about food attractions of the Carnival season, the real symbol and must-try of Mardi Gras was, is, and will always be King Cake. Cakes may have different fillings, but all of them have a toy baby inside. According to the tradition, the person who is given the piece with the baby inside must buy the next cake or throw the next party. Another delight of local cuisine that will make your tummy happy and will make you fall in love with Mardi Gras is the traditional Louisiana sandwich, called Po-Boy.

To wash down all the dishes, some good Sazerac will be essential. It is considered to be a strong drink, so don’t abuse unless you want to have a crawling hangover next morning.

TIP 1.  If you are planning to go for Mardi Gras, you should definitely come at least 5 days before Fat Tuesday, in order to catch parades of the most popular krewes (organizations that put on a parade or ball for the Carnival season), like Bacchus, Endymion, Zulu, Rex and many others.

TIP 2. Mind, that the parades travel across  New Orleans on different routes. They are all astonishing and indescribably impressive but remember to check times and locations so that you don’t miss the ones you have in your top list to visit. Before you go for Carnival, do a little research about such simple things as proximity to the bathroom and where to rest in order to fully enjoy every single moment of the festival.

TIP 3. Start your preparation for Mardi Gras with getting a costume to blend in with revelers. You can create your unique look at Fifi Mahony’s wig shop in the French Quarter.

TIP 4. Also, you probably heard about beads throwing or doubloons, which is a common feature of every parade. If you are Mardi Gras beginner, here is an advice for you: please, step on doubloons and wait for a moment to pick it up, if you don’t want to have your finger smashed.

TIP 5. Don’t follow stereotypes. Contrary to what many people believe, Mardi Gras Parades are not only for drunken revelers. The city and its parades are for families too (with the exception of French Quarter). Most New Orleans families come there early, bringing blankets and picnic baskets. It is common to see family picnics and BBQs on St. Charles Avenue somewhere between Napoleon Avenue and Lee Circle. If you go into this area, you will find family picnics and barbecues all along the parade route. 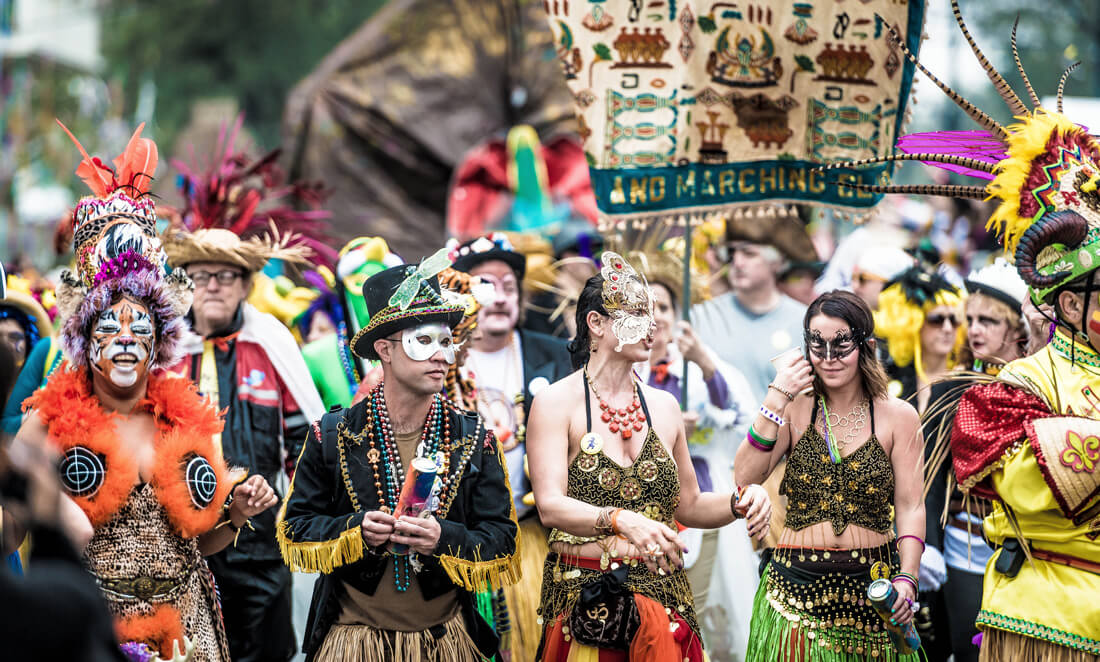 Mardi Gras is probably one of the GREATEST FREE SHOWS IN THE WORLD! If not the number one. Don’t believe me? Then, come and check. Don’t procrastinate and start planning your trip right now. Time is fast, this massive, bustling, dancing, singing, non-stop celebration is just around the corner. Go and get your own impressions and unforgettable memories from New Orleans’ most joyous and fascinating festival.