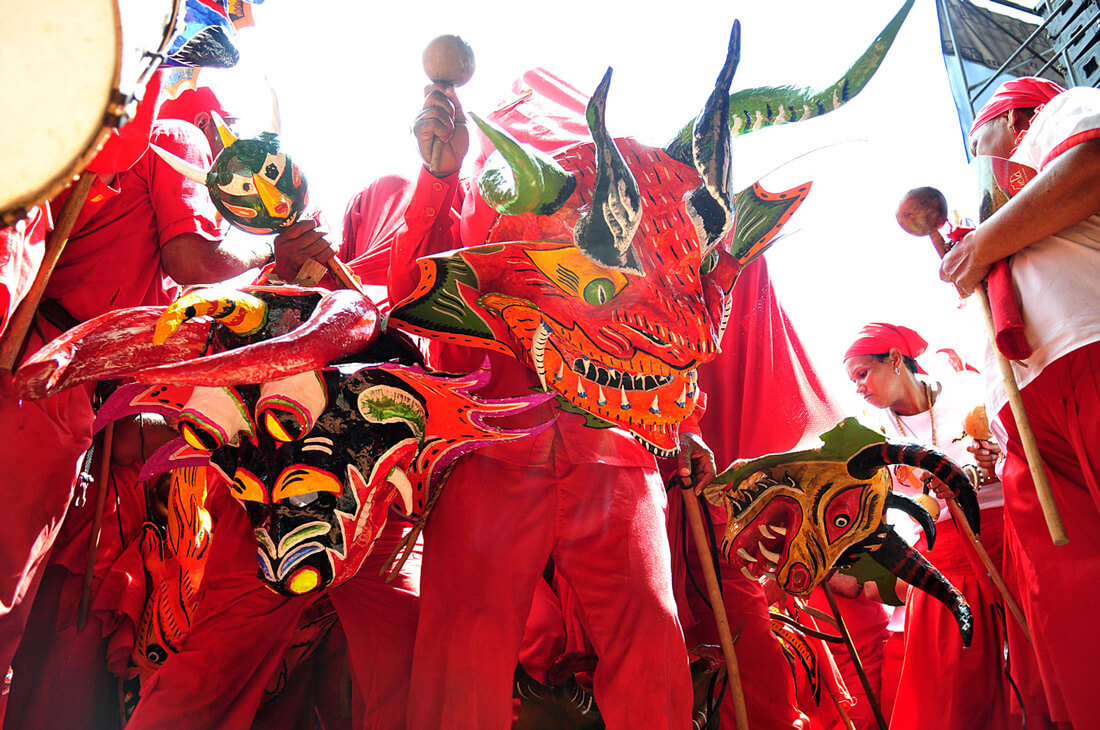 Devils parade through the streets, shake maracas and beat drums. It looks like all the evil came out from Inferno to mischief and have fun among people. But no, in fact, it is Venezuela’s one of the biggest catholic holidays – Corpus Christi, renowned all over the world for devil masked frantic dancing.

The idea of the festival is to celebrate the victory of good over evil. However, the festival’s old-century tradition, Diablos Danzantes, makes an impression as if dark forces defeated good, but not vice versa. Nowhere in the world, you will find an analog to this holiday and for a good reason, Dancing Devils of Corpus Christi became recognized as Intangible Cultural Heritage by UNESCO.

THE HISTORY OF DANCING DEVILS

There are different stories of how this festival emerged. Some people believe in the myth about the San Francisco de Yare brotherhood. According to that myth, hundreds of years ago there was a priest without a penny to hold the procession of Corpus Christi who said: “If there is no means nor believers to carry the Blessed Sacrament in procession, then the devils come!”. After a storm, several devils show up in front of the church. Since then in San Francisco de Yare, the tradition of dressing up as devils and dancing through the streets has appeared.

Another version, which tells about the roots of the holiday is probably a more realistic one. Historians claim that devil dancing procession originates from the combination of a Spanish religious ritual and some traditions of African slaves, that were brought from their native land, to sweat on cocoa and sugar plantations for Spanish masters. Indeed, if to analyze Diablos Danzantes with its hypnotizing drumbeats, flashy costumes and wild dancing in huge masks, it reminds a bit Festima (The International Festival of Masks and Arts) in West Africa, world-known for its eccentric mask performance.

Nowadays old-century tradition evolved into a huge celebration that takes place through the eleven neighborhoods in central coastal regions of Venezuela on the 9th Thursday after Holy Thursday. The traditions of celebrating Corpus Christi differ in every region.  For example, in Naiguatá, a town in Vargas, the dancers don multi-colored costumes with masks usually representing marine animals. The main specialty of the celebration in this town is the right of women to dance with men on equals, while in other regions it is strictly prohibited. No doubts that the town  Naiguatá hosts a breathtaking celebration. Other towns, like Cata, Cuyagua, Turiamo, Chuao, Patanemo, San Rafael de Orituco, Tinaquillo, San Millán can boast about not less exciting, and eye-catching festivities too. However, the biggest celebration, the most impressive and annually swarmed by myriads of tourists, takes place in San Francisco de Yare, in the state of Miranda. This event is definitely worth visiting. 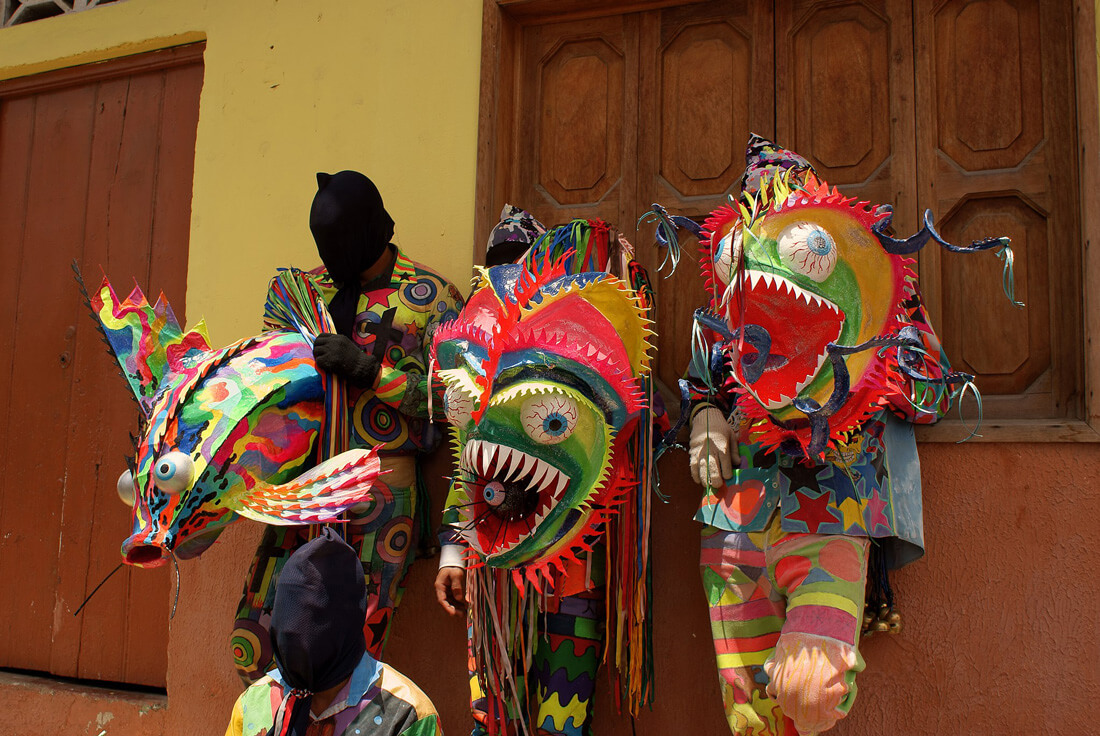 WHAT TO EXPECT FROM DANCING DEVILS OF CORPUS CHRISTI

The celebration commences on Wednesday the day before Corpus Christi with a meeting of the Devil Dancer’s Confraternity. Dancing devils gather for dancing and blessing ceremonies and prayers to protect the men and young boys who will take a part in the procession from bad lack, evil powers or any spiritual harm. Dancers are also known as “promeseros” (from Spanish “pledgers”) because they make a pledge to dance on Corpus Christi for a certain number of years or for the whole life. By dancing, people ask God for a favor, for instance, to cure their family member of long or rare disease or the one that put at risk the life of a person. When the sun comes up, the streets are filled with the dancers in red extravagant robes with accessories such as scapulars, crosses,  rosaries and of course elaborately made handcraft masks depicting devil. They parade through the city, playing mischief and dancing around to the tunes of Venezuelan cuatro (small guitar which has four strings and resembles a ukelele), maracas and drums. Closer to the midday, the masked prankish devils congregate in front of the church. There you will see the spectacular performance. In front of excited crowds, devil dancers pretend to attack the church and fight with guardians. Again and again, devils attack, but each time they are repelled. Finally, after a row of unsuccessful attacks, the devils accept defeat and kneel in front of the Eucharist to show obedience and respect. Such an ending shows the main meaning of the holiday  – the Triumph of Good over Evil. 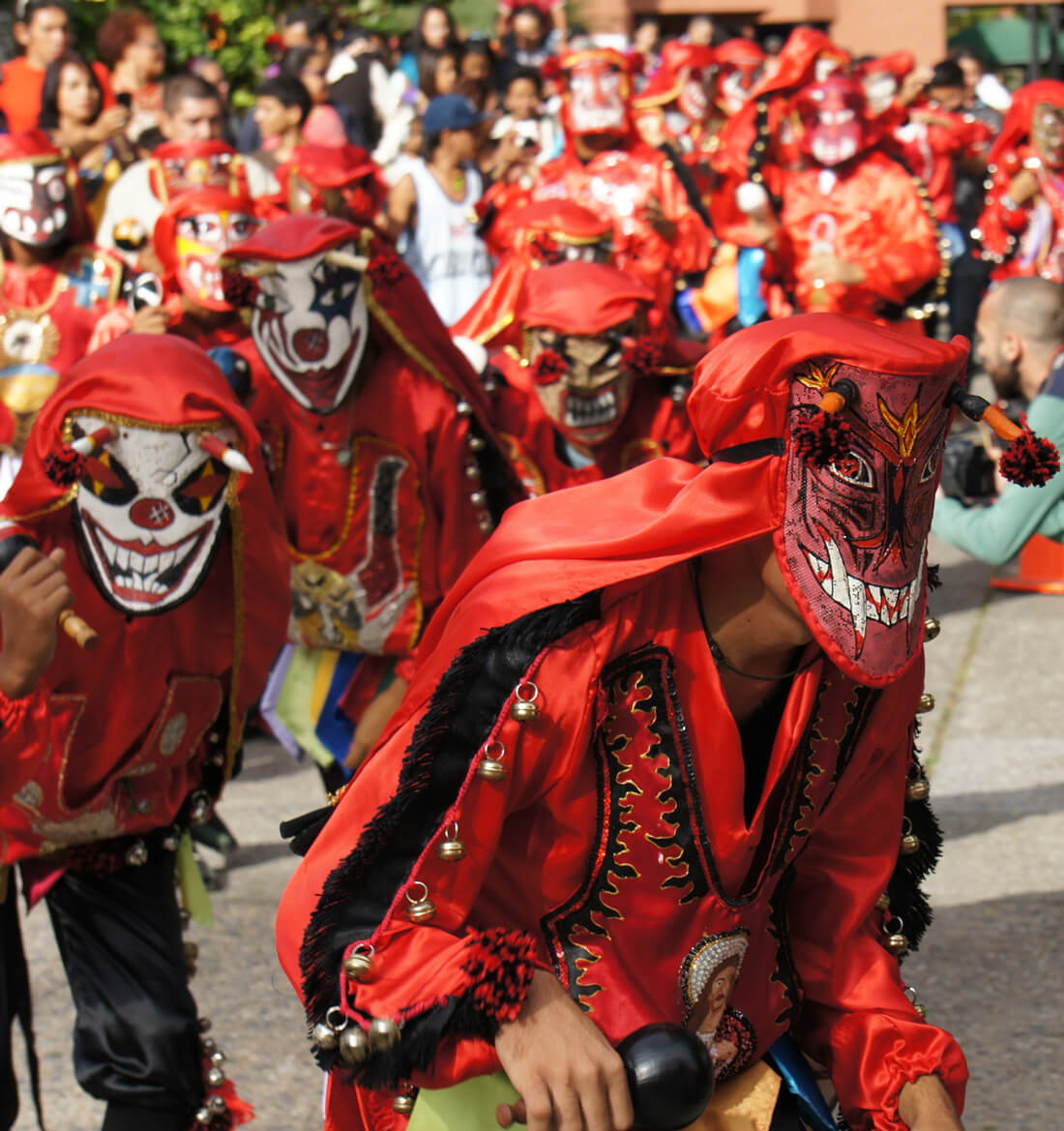 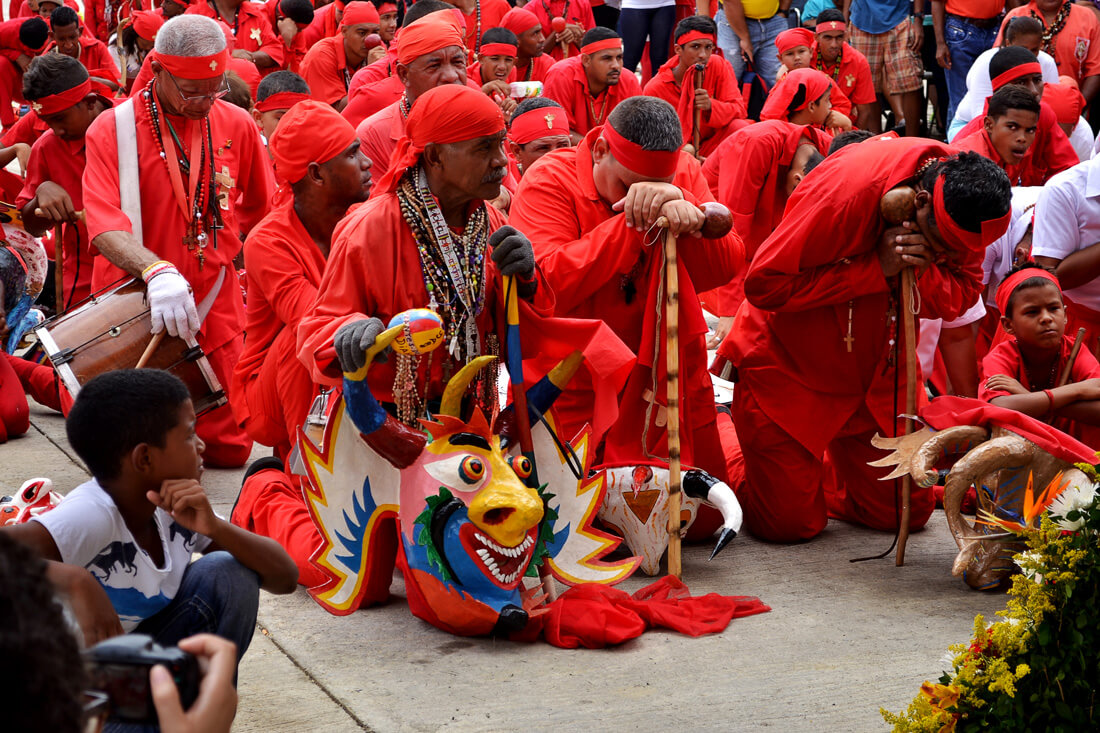 DOS AND DON’TS AT CORPUS CHRISTI

DON’TS. Do not stop yourself from visiting Corpus Christi because of the stereotypes about Venezuela imposed on society by social media. Yes, Venezuela is not the safest place in the world, however, it does not mean that you will become a victim of a crime as soon as you cross the border of Venezuela. Just follow the simple rules: do not walk late at night through the dark street and do not abuse alcohol partying in local bars and clubs.

DOS. Do contemplate the performance of Diablos Danzantes. Do celebrate with locals and get acquainted with their unique culture and traditions.

REMEMBER, that every country can be dangerous, we are not protected from some twists and turns of our life. You never know what will happen to you next minute. However, there is no a bad country or a bad city. Every country, every city and every festival is a separate chapter in the book known under the name “Planet Earth”. “Dancing Devils of Corpus Christi” is another chapter in this book and can be another chapter in the story of your adventurous life.

On Thursday, 11th of June 2020, you are welcome to visit the Dancing Devils of Corpus Christi, which is not simply a religious holiday, but an embodiment of strong cultural identity, reverence to ancestors, traditions, and history of Venezuelan people. 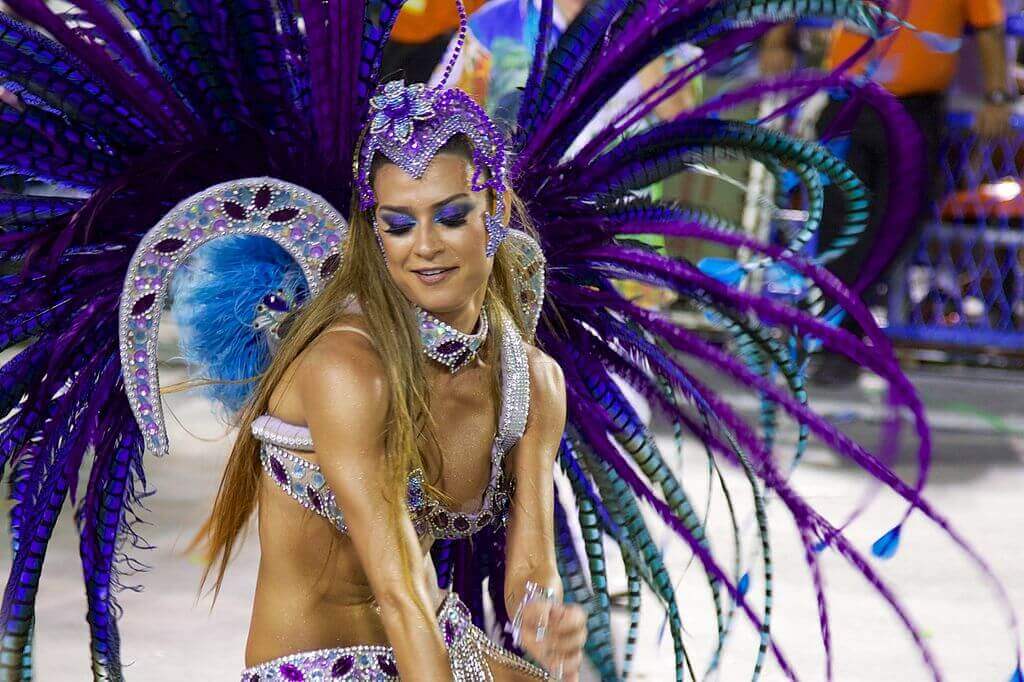 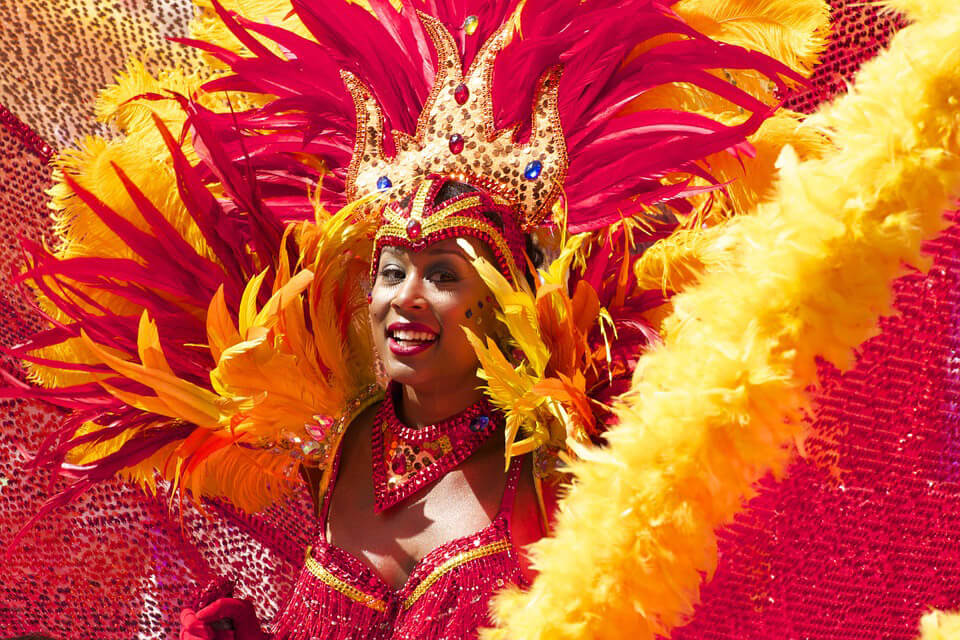 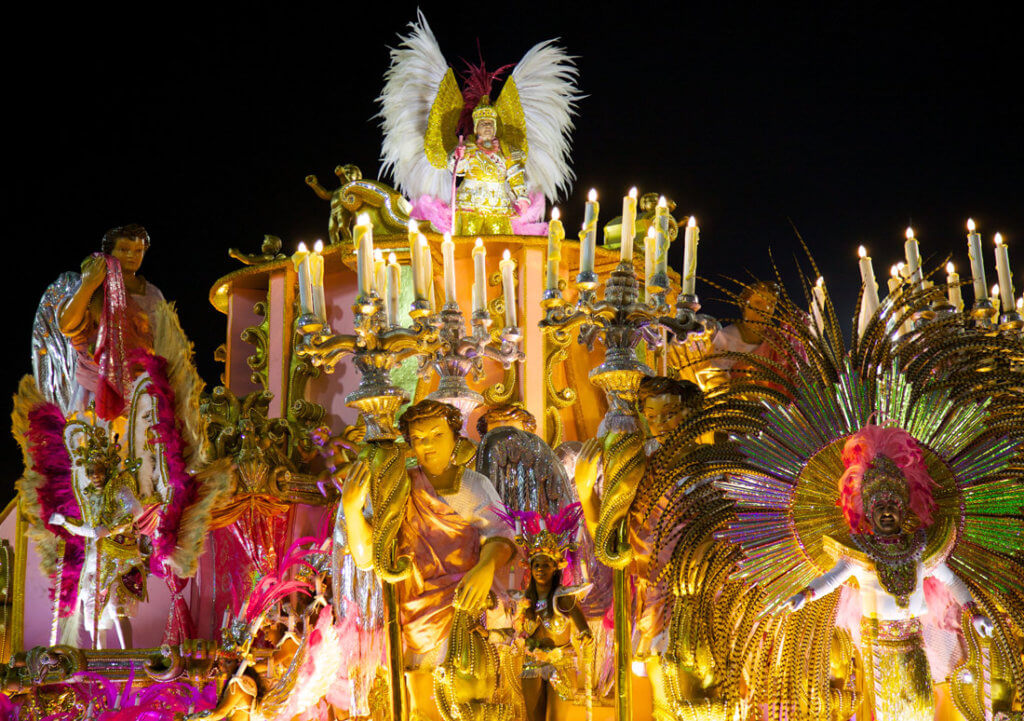 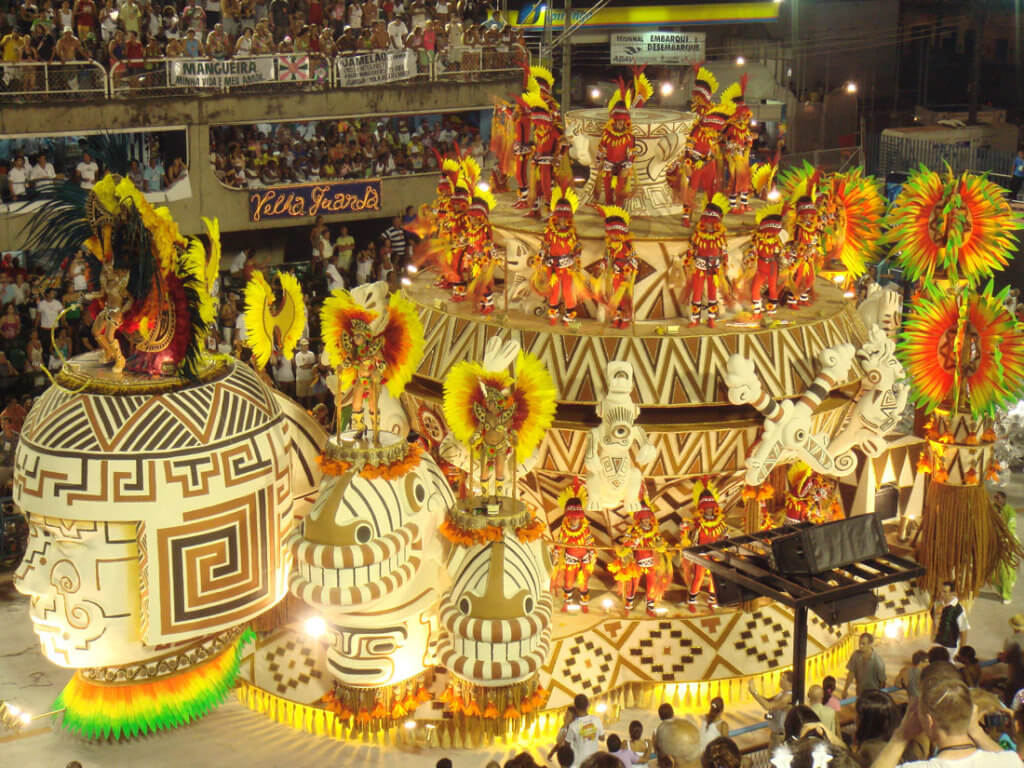