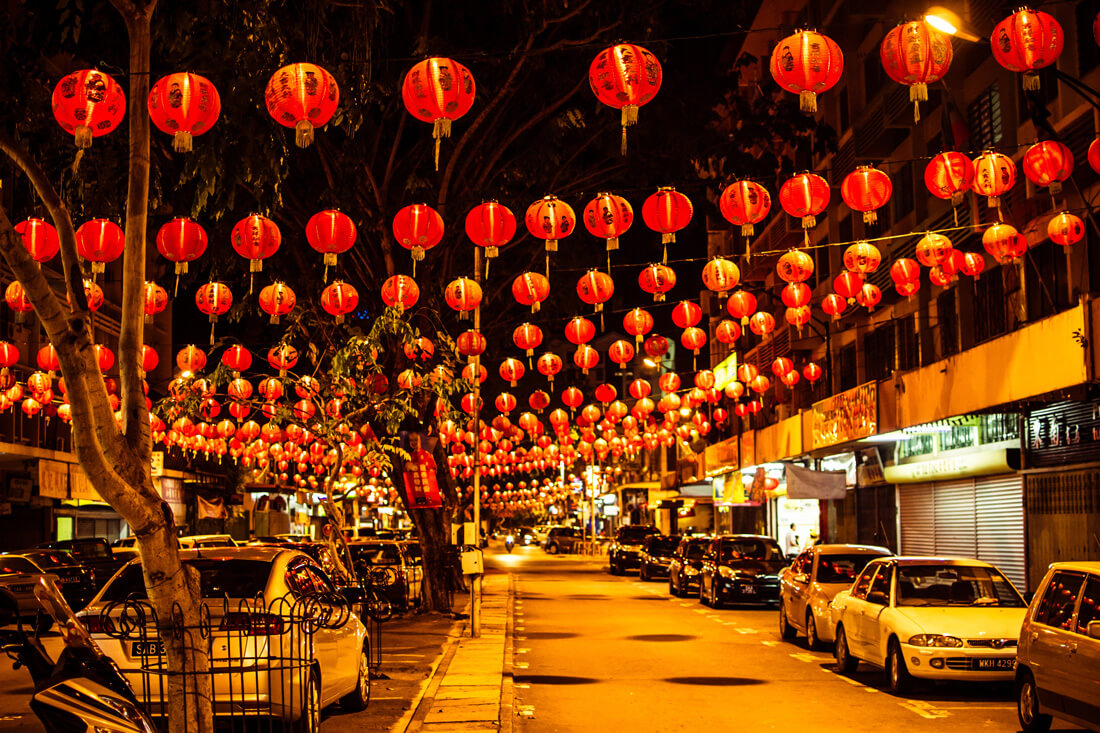 Excitement builds up all around the world when the Chinese New Year approaches. This is festival known for streets lit up with bright lights, fireworks whistles that can be heard a mile away and smells of freshly-baked cakes that can tease our nostrils. A cheerful and vivacious mood can be felt in the air. This is a time when all worries and sorrows are left behind and the only rule is to be happy and celebrate.

This holiday has a long history of over 3,800 years. According to the popular myth, the origin of this day lies in the fight against Nian(Year), a beast in Chinese mythology. On the night of New Year’s Eve, the beast visited the cities and eat crops, cattle, and even people. In order to protect themselves from the monster, people placed food on their porches so that evil creature wouldn’t harm them.

Going back to the reality, of course, nobody has to fight a beast. Modern Chinese New Year is a colorful friendly celebration which can be found all around, far beyond China. In several corners of the world, major China Towns annually hold outstanding New Year festivals and parades too. To say, that you can visit some Chinese New Year festivities in some big cities, as well as in small towns throughout the whole planet, will not be an exaggeration either.

WHERE TO SPEND CHINESE NEW YEAR

Without a doubt going to Beijing on Spring Festival would be a great decision. Celebration in the capital of China is, of course, the fanciest of all. The city hosts a series of Temple Fairs, that have been a part of life in Beijing for hundreds of years. There are two most recommended fair temples in Beijing: Dongyue Temple Fair and Ditan Park Temple Fair.

The Dongyue Temple Fair features five days of performances, with acrobats, opera singers, drummers, calligraphers and puppet shows. Another worth of visiting fair is Ditan Temple Fair. It is one of the most popular temple fairs, that includes a variety of performances, wide array of local Beijing snacks and handicrafts. The price of a ticket for each of mentioned above temple fairs is around 10 RMB/person( approximately $1.5 USD), which is quite affordable for any tourist. 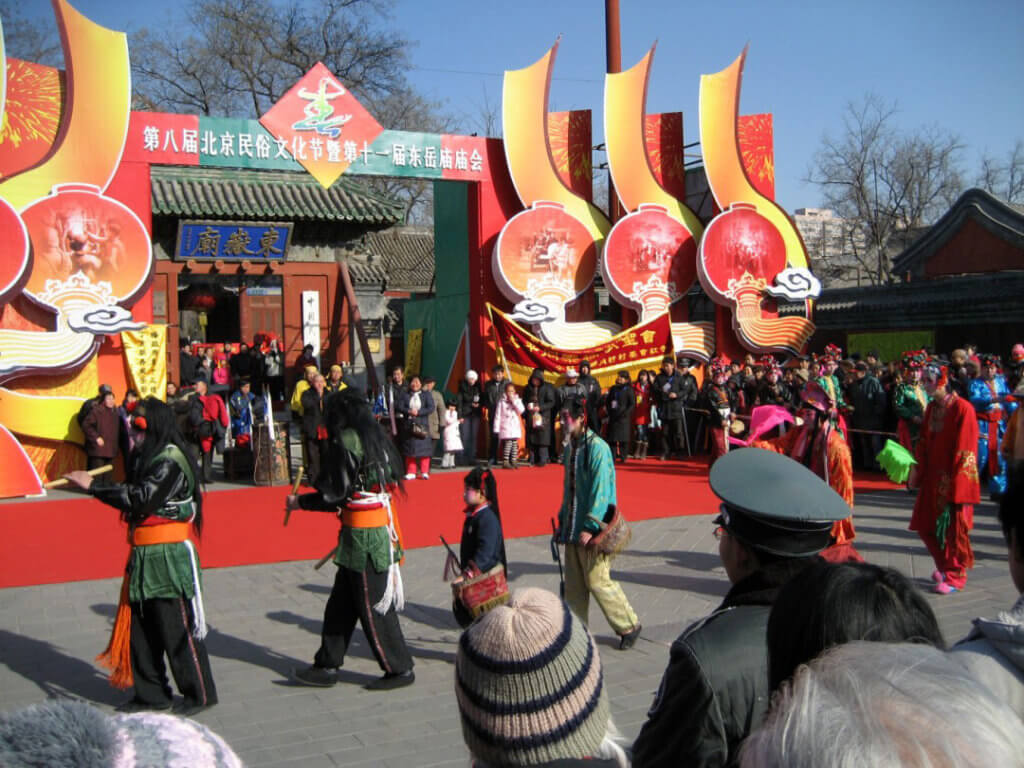 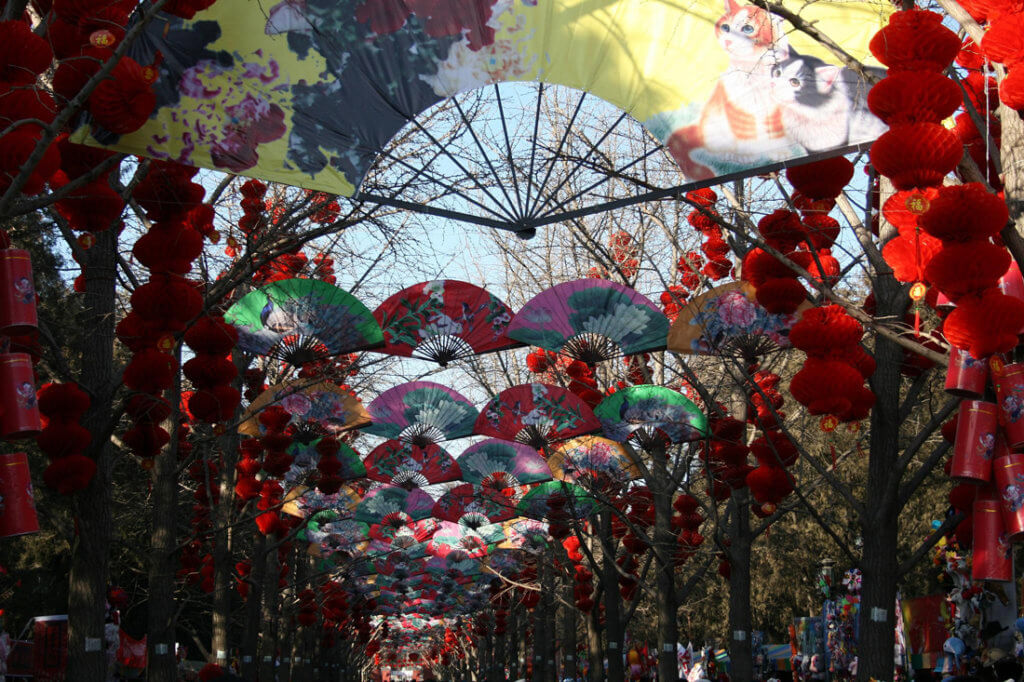 Except for the Temple Fairs, visitors can also attend the Longqing Gorge Ice and Snow Festival (nearly 50 miles outside of central Beijing) or the Longtan Fair. 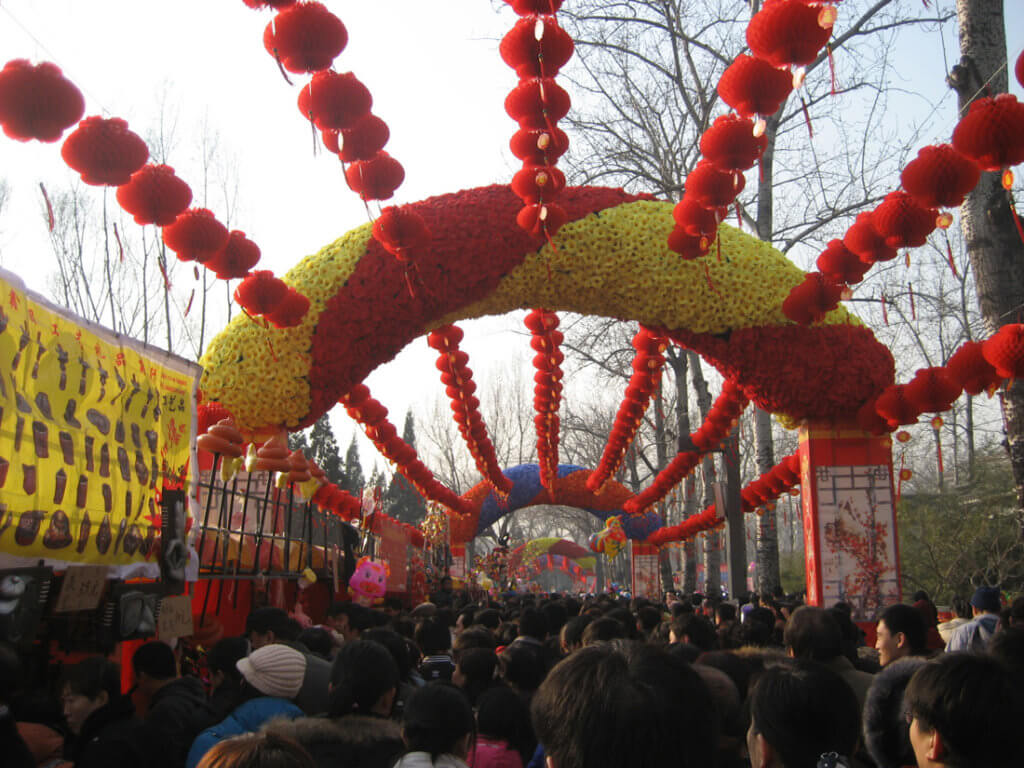 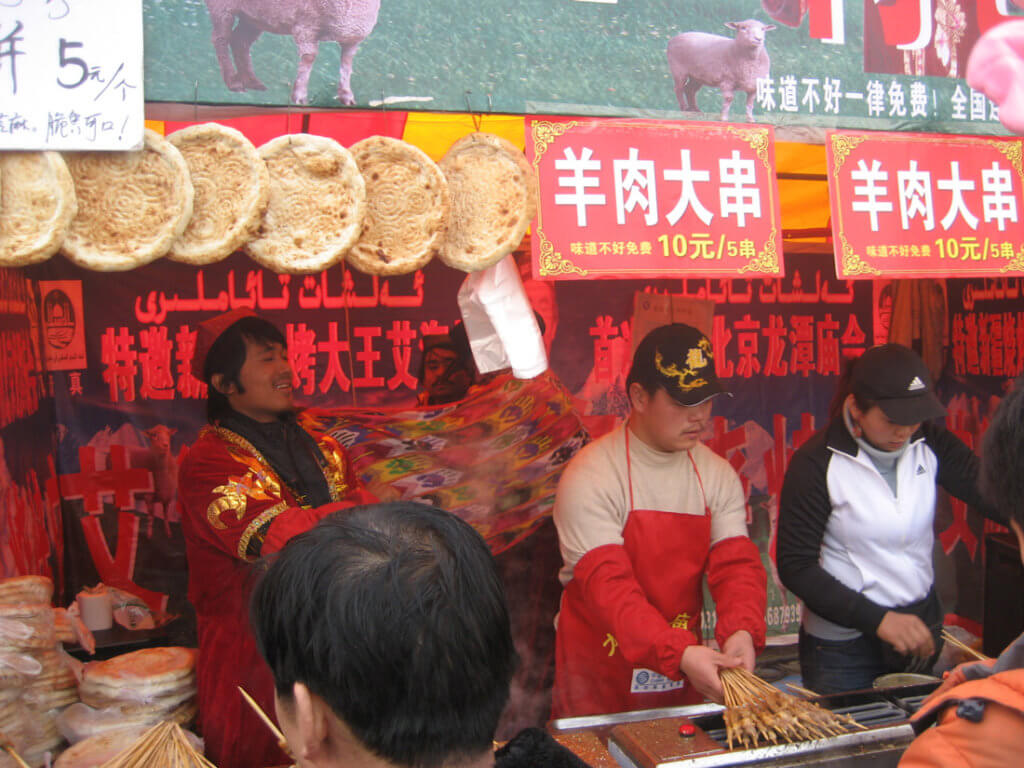 Have already been to Beijing?  Another place for spending a marvelous New Year vacation is the big southern city of Guangzhou. In China, it is called the “Flower City” for its blooming gardens all year round. Guangzhou is well-known for its flower fairs held annually during the New Year. During the fair, streets of the city are decorated with beautiful, fragrant flowers, and miniature landscapes. Also, at the fair, you can buy paintings and calligraphy from local artists or simply enjoy the various folk performances. 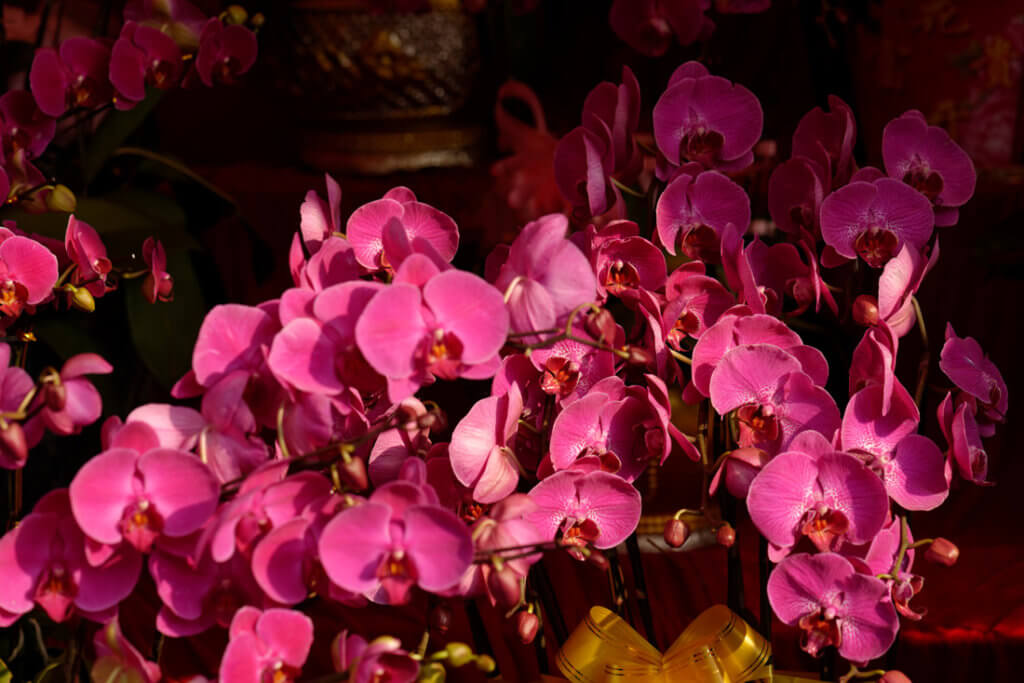 Among the other traditions of Spring Festival in Guangzhou is the lion dances that are performed to bring good fortune and to get rid of evil spirits. This dance is a symbol of Chinese New Year, a must go kind of event while being in China at New Year! 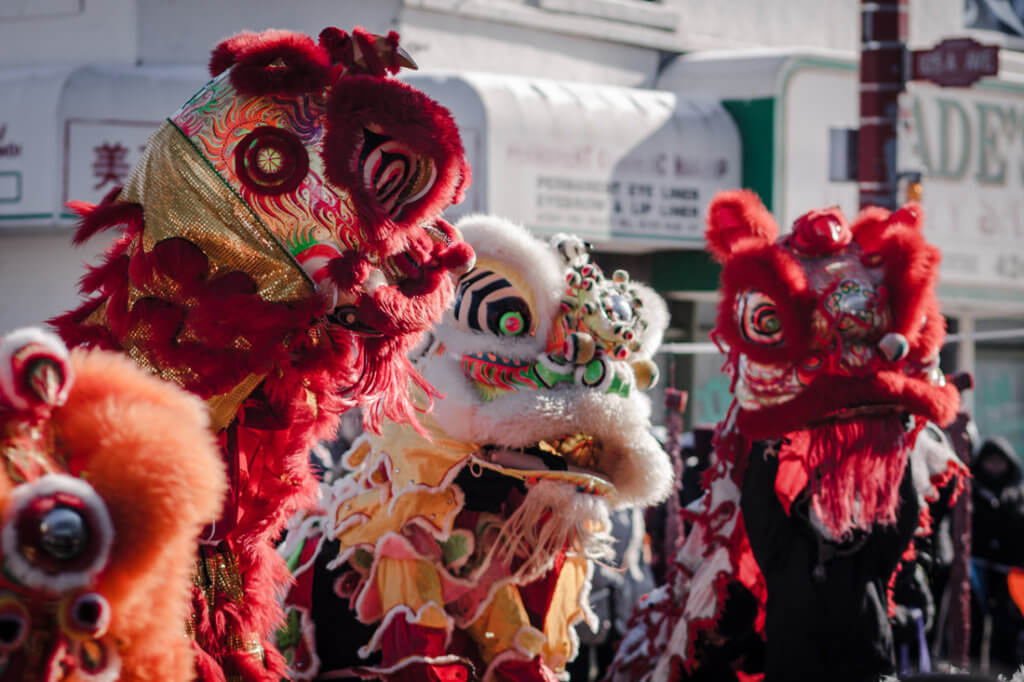 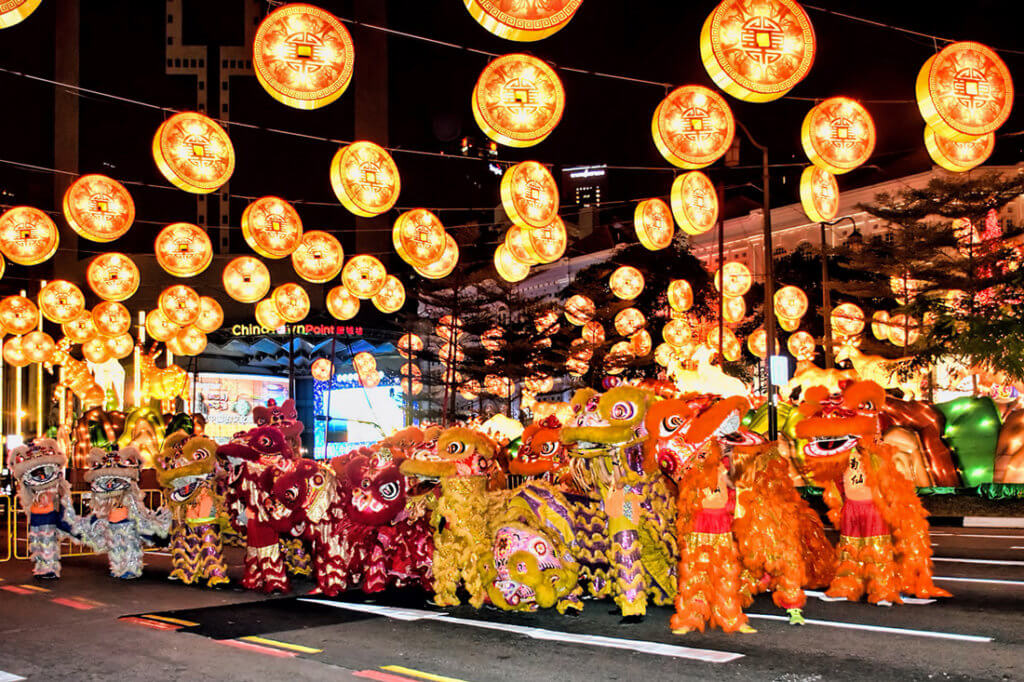 Last but not least, one of the favorite cities of our team: Hong Kong. New Year in this megapolis is a unique mix of modern fun and ancient traditions. One of the reasons why people go there on New Year is roaring, colorful, indescribable in one word fireworks show. The Hong Kong’s New Year Fireworks and Countdown celebration is one of the most anticipated events of the year. Some good spots to watch the fireworks shows are Tsim Sha Tsui Promenade, Harbour City Rooftop Car Park, and Avenue of the Stars. In fact, you can enjoy the fireworks show from any place of the city, as this colorful, bedazzling magic performance of light is impossible to be unnoticed.

Chinese New Year can be celebrated almost in any big city, whether it is New York, San Francisco or Singapore, or, of course, China, which will always be the heart of old as well as contemporary  New Year traditions and festivals. Chinese New Year is not only an excellent opportunity to celebrate again New Year’s Eve, but a chance to get an experience of a great cultural celebration (and maybe get a second shot with any past failed New Year’s resolutions).

And, clearly, good trip requires great preparation. Even though Chinese New Year is celebrated almost everywhere, certain locations, like China, might get everything booked months in advance so remember: 不善始者不善终 (A bad beginning leads to a bad ending. Chinese proverb). Avoid paying extra due to bad planning, get your booking done as soon as possible and 吉星高照 (fortune will smile on you!)!