There are so many hilarious stereotypes about British people, some of them true, but most of them are false. And when the whole world sees British as reserved, tight-lipped and calm, I can argue about it. I will prove the British are not emotionally dead, they can be upset, excited and even crazy. Don’t believe me? Then check out one of the weirdest events in Great Britain — Cooper’s Hill Cheese-Rolling and Wake. When normal people eat cheese, British roll it down from the cliff-like hill, running to catch it as if it is made from gold. The coolest fact about this festival, that this cheese insanity is contagious, as people from all over the world annually come not only to watch but to take a part in this competition.

The origins of this event are not clear. Most of the people believe that it originates from pagan rituals of celebrating the arrival of spring. However, nowadays, people are more focused on the very event, than its roots. In 2020, it will be held on 25th of May, traditionally in Brockworth, United Kingdom.

WHAT TO EXPECT FROM COOPER’S HILL CHEESE-ROLLING AND WAKE 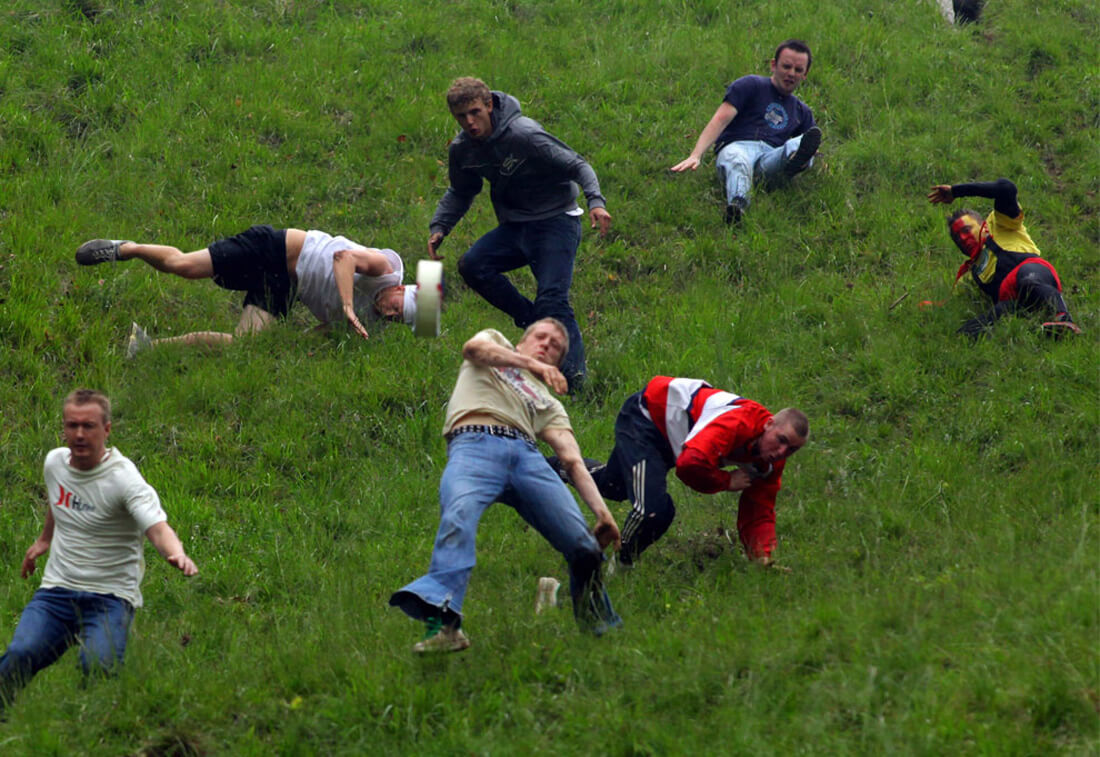 The cheese madness starts at 12 pm, but we recommend to come much earlier, in order to get a nice spot where you can contemplate this event. The center of the whole festivity is a 9 pounds of round Double Gloucester cheese.

As soon as the cheese is sent rolling down the hill, contestants start running down Cooper’s Hill in the chase after round Double Gloucester cheese. The aim of participants is to survive and to catch the cheese. We say “to survive” because this round cheese may reach the speed up to 110 kilometers per hour. Trying to get it, people fall, stumble or fall head over heels through the uneven rough ground, with very often numerous injuries in the result. That is why there were attempts to prohibit the event, but locals protected their old-century tradition, and instead of disappearing, this event gained even more popularity. Cooper’s Hill Cheese-Rolling and Wake has been held for many years and the only thing that has changed, for the reasons of safety, is the cheese which since 2013 is replaced by a foam replica. At the end of the competition, the lucky man crosses the finish line and wins the cheese, but a real one, not its replica.

As far as you understood from our vivid description above, this race in pursuit of cheese is definitely not for the faint of heart, but only for brave or who is out of his mind. Though, if you want you can easily participate, without any registrations and preparations, all you need to do is to show up and say that you came to get that cheese. And, by the way, not only men can take a part in cheese race. Usually, there are five downhill races( four for men, one for women), and also one uphill race, but the number of races and the timetable varies from year to year. Anyway, before taking part in this insanity, think three times, don’t overestimate yourself and don’t underestimate the tricky steep hill. We will remind you one more time that this traditional British competition never goes alone, but with a host of bruises and scratches, if you are lucky, and if you are not, then with the dislocated shoulders, twisted ankles and a number of broken bones. The whole day during the Cooper’s Hill Cheese-Rolling and Wake can be perfectly summarised as ” twenty young men chasing a cheese off a cliff and tumbling 200 yards to the bottom, where they are scraped up by paramedics and packed off to hospital”. That is how the author of The Sydney Morning Herald described the renowned cheese race in his article “Return to edam”. Nevertheless, we don’t have an intention to keep you away from participating in Cooper’s Hill Cheese-Rolling and Wake. We just want to tell, that watching this astonishing event is not less thrilling experience than participating in it.

Instead, we suggest you come and see everything with your own eyes and understand what people risk their lives for. We suppose some people do it for fun, others in order to have what to say to grandchildren or simply to brag, of course in case they won. For locals, it is a legacy from their ancestors, which they cherish and protect for years. And what do you think about Cooper’s Hill Cheese-Rolling and Wake? Don’t hesitate and go for your next adventure in the picturesque village of  Brockworth.