India is known to be one of the most fascinating, colourful and bizarre countries around the globe. It is a hub of astonishing traditions, crazy cultural rituals and fabulous religious holidays that have been celebrated through centuries. This country is a country of contrasts, where bright colours, smiles, and happiness merge with dark colours, sorrow, and poverty. Nevertheless, India remains a unique and beautiful country, drawing the attention of many travelers who search for adventures and unforgettable memories.

You can come to India at any time of the year and you will be not disappointed. But in spring, the number one destination in India is Mathura and Vrindavan. There you will have an opportunity to witness one of the most colourful festivals on the globe, called Holi. First of all, Holi is a symbol of the victory of good over evil and the celebration of the advent of spring. But in fact, Holi is widely renowned as the Festival of Colours and Love, as it is a time when people can meet each other, laugh, enjoy the abundance of colours and finally it is a time when people learn to forget and forgive, to begin a new life with the arrival of spring.

As most of Hindu festivals, Holi didn’t start a few years ago, but centuries ago. It is an ancient holiday with a long history. There are numerous mythological stories and legends, revealing the origin of the festival. However, there is one, probably the most reliable legend found in the Sanskrit Manuscript of the 7th century. It tells the story of young Krishna who was very jealous about the fair skin of Radha since he has dark skin. Krishna complained to his mother Yashoda, who advised him to paint Radha’s face in various colours. Therefore, Lord Krishna and his friends decided to go to the Barsana, the village where Radha lived, and to colour Radha’s face as well as the other Gopis ( cow-herding girls) from the village. That is how the Festival of Colour started.

But going back to the story of Krishna and Radha, we should mention one more fact, the Gopis in response to Krishna’s joke, beat them with Lathis (sticks). The tradition passed the test of time and is still celebrated as Lathmar Holi at Barsana.  Lathmar Holi is probably the only chance for women to beat men, even just in a playful manner. In any case, men come prepared and usually protect themselves with shields, so nobody gets hurt. This is a very spirited and animated event, which we highly recommend to visit as a part of Holi celebration. Traditionally Lathmar Holi is held seven days before the Holi officially starts. Barsana is situated 115 kilometers from Delhi and only 50 kilometers from Mathura. The easiest way to get to the village is to hire a cab.

Another event, you shouldn’t miss is Phoolon wali holi, which is celebrated on the Ekadashi before Holi at the Banke Bihari Temple in Vrindavan. Phoolon means flower, therefore the main peculiarity of the event is that instead of dry and wet colours, people use flowers. The temple gates are open around 4 pm after which for 15-20 minutes priests throw various colourful flowers on the devotees. This is a charming, yet short event, so in order not to miss it and capture beautiful pictures of ‘flower rain’, you should come early, just when the gates open.

To continue the parade of events that take place before and during Holi Festival, if you arrive at Vrindavan early, visit Widow’s Holi. You probably heard many horrible stories about the life of women in India. In the 21st century, it is hard to even imagine, how little rights Indian women have. Speaking of widows, for years they lived a difficult life without earthly pleasures, chained by some preposterous rules, traditions, and superstitions. Widows were isolated and forced to live in Ashrams in Varanasi and Vrindavan during the Holi Festival. Participation in celebration of colours was strictly prohibited for them. But all the rules are made to be broken. So, a few years ago women managed to break this rule and to play with colours as equals. This kind of a new tradition nowadays slowly but confidently gains popularity. More and more travelers come to Pagal Baba Widow Ashram, Vrindavan, to witness this unique celebration of colours, as the embodiment of freedom of expression of Indian Women. 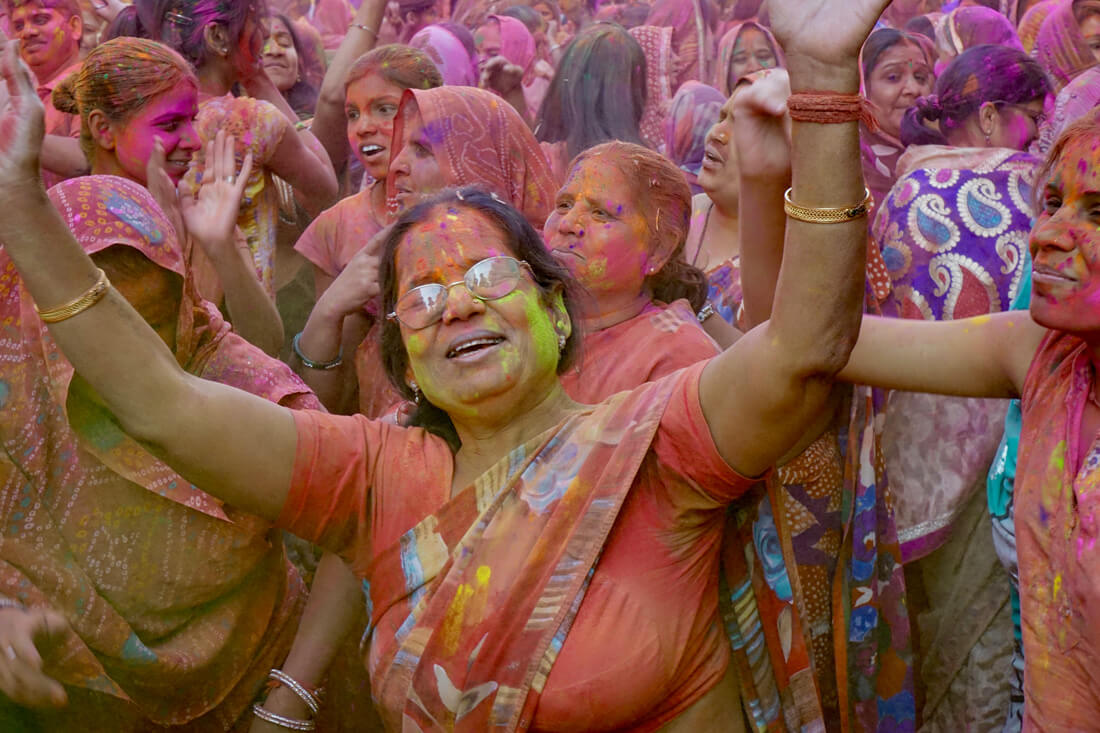 Next must-go is Holi at Banke Bihari Temple, which is held on the day before the main Holi Festival. It starts in the morning and finishes in the afternoon, around 1.30 pm. The Banke Bihari Temple gates open and welcome every visitor without exception to play colours with Lord himself. The priests throw colours and holy water at people. Crowds are singing, falling in the euphoric and exhilarating atmosphere of colours. Although it is a very bright event, that may seem the friendliest event ever, be aware that celebration may become a bit uncontrolled and even a bit dangerous for women.

Around 2 pm, the Holi festivities in Vrindavan come to the end. We recommend you not to lose time and move straight to Mathura, to relish splendid Holi procession. You will see myriads of children dressed up as Radha Krishna and about ten vehicles decorated with flowers. The location looks like the battlefield of colours, all the people around play dry and wet Holi with each other and we advise you not to stand aside, but join the crowds, become a part of festivity and colour yourself completely. Let yourself be free, paint your memories in a variety of colours, make your white t-shirt a colourful masterpiece.

On the 9th of March, the evening after the Holi procession is the time for Holika Dahan, the burning of the huge effigy of Holika at the Holi Gate. People gather around the fire, sing, and dance, celebrating the victory of good over evil. 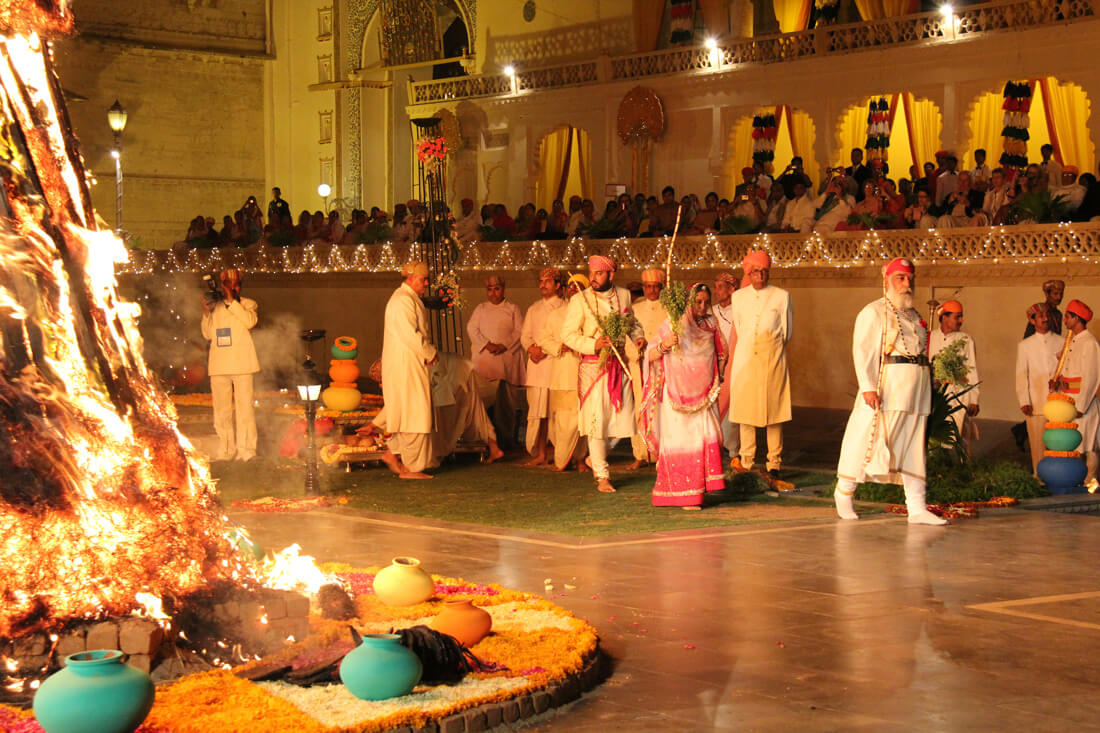 Finally, the day of the largest Holi Festival comes. In 2020 it takes place on the 10th of March at the majestic Dwarkadheesh Temple in Mathura. As soon as gates open, hundreds of local men and tourists, armored with dry colours, water balloons filled with colour water, water guns (pichkaris), swarm the Temple and began the “Colourful fight”. Also, people simply chill out, dancing and singing to the drumbeats. While playing colours with people, you can also try some traditional dishes, like gujiya (sweet dumpling), mathri (traditional  Indian crispy cracker), malpuas (rich, soft pancakes, soaked in saffron flavored syrup) and other delicacies. The men usually drink some beverages based on local intoxicating herbs. Bhang is known as the most popular cannabis drink in India. That is actually the reason why you will not see a lot of women at the festival. You can also try bhang, but of course, we advise not to abuse. There is much more fun, being sober and conscious sometimes. Do not experiment with your body.

If you don’t mind literally becoming a walking canvas, go to Holi, and bring colours into your life!

Welcome to the Festival of Infinite Colours!